Judge warns against ‘exaggerating’ deficits in ward of court system 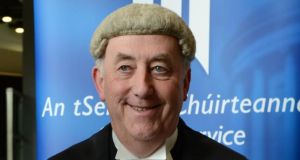 The president of the High Court, Mr Justice Peter Kelly, has warned against the “exaggeration” of deficits in the ward of court system, under which orders may be made to bring vulnerable adults under the court’s protection.

Mr Justice Kelly said that even though a “good deal of criticism” had been made of the system, it had to be borne in mind that it had its merits.

He was formally launching a review by the National Safeguarding Committee of the current system, which calls for the urgent commencement of assisted decision-making legislation to help reform the current “inadequate and archaic” regime.

A ward of court is someone who is deemed by the court to lack capacity to make decisions for himself or herself, and the court steps in to act as agent for the person.

The current system was set up before the foundation of the State for people of “unsound mind”.

Under the recent Assisted Decision-Making (Capacity) Act, the system is to be gradually wound up and replaced by a new assisted decision-making scheme.

Mr Justice Kelly, as president of the High Court, has responsibility for the wards of court list and for the €1.27 billion in funds belonging to the 2,639 people who are currently wards.

The review of the ward system by barristers Kate Butler and Fionnuala McGee found there was “substantial public confusion and lack of understanding” of it, and that it relied too much on the integrity of family members and professionals.

Speaking at the offices of the Mental Health Commission in Dublin on Thursday, Mr Justice Kelly said the fact that he was participating in the launch of the report was not to be taken as necessarily an endorsement of everything that was said in it.

He was “completely open-minded” for suggestions on changes that might improve the current system and he would give the report due consideration.

“But we must remember that the system we have at present is the only system. Even though a good deal of criticism has been made of it, it has to be borne in mind that nonetheless it does have its merits,” he said.

“There are many people who, as a result of the invocation of the wardship jurisdiction, are alive today, are living in proper accommodation with their medical and nursing needs attended to, have had their property restored to them, have had their rights to a legal share in the estate of a deceased asserted, have had [succession] applications made on their behalf, and indeed have had actions for damages prosecuted successfully,” he said.

The chair of the National Safeguarding Committee, Patricia Rickard-Clarke, said the 2015 Act provided for “a long-overdue modernisation both of the system for supporting people who lack capacity to make decisions, and the human rights principles underlying that system”.