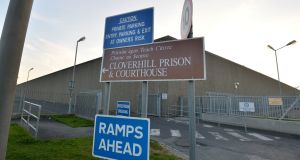 The issue of drugs being thrown over exterior walls into Cloverhill Prison continues to be “a huge cause of concern”, according to a report into the jail.

The findings are among 14 reports into each of the country’s prisons, based on visits in 2016.

The Cloverhill Prison Visiting Committee said a site outside the west Dublin prison had been identified as an area that people are using to throw contraband over the walls and that due to “resource issues”, it cannot be patrolled at all times.

It also noted its “disappointment” that drug detection dogs are still not being used.

The committee said it remained “deeply concerned” at the high numbers of prisoners sharing prison cells and “therefore lack toilet privacy”. In October 2016, only 55 inmates out of 415 had 24-hour access to private toilet facilities.

Gang culture was also highlighted as being a “serious problem” within the prison, with the numbers in protection described as “high”.

The committee said the use of video links for court appearances continues to be an underused resource and “in our view, is a scandalous waste of public funding”.

The visiting committee to Wheatfield Prison in Clondalkin, also in west Dublin, said drugs were being thrown from outside the prison walls on to netting over the yard and prisoners would retrieve the packages by throwing objects up at the netting to release them.

It said more netting was required and a review of yard usage should be conducted.

“Drugs in Irish prisons are an ongoing concern and Wheatfield Place of Detention is no exception,” the committee said.

Serious shortcomings in the conditions for prisoners at the Dóchas women’s centre in Dublin were highlighted, including concerns that women leaving the prison are “thrown back on to the streets” homeless.

The committee’s report said numbers in the centre regularly reached 120, and occasionally above that, even though the full capacity was 105.

The report into Castlerea Prison in Co Roscommon said staffing levels “have reduced again over the year” due to retirements and transferred staff not being replaced. It said staffing shortfalls need to be filled in order to ensure prisoners have access to work, training and education on a daily basis.

“With prisoners being escorted to court, at times to hospital, and dealing with committals and discharges, this can lead to a lot of time being taken up by staff which leads to a shortage of staff to deal with workshops and other activities for the prisoners,” it said.