Body was discovered on the shore in Waterville, Co Kerry 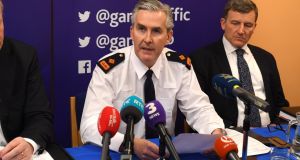 Supt Flor Murphy confirmed that gardaí were aware of the 1995 baby discovery and said ‘everything will be looked at’. Photograph: Domnick Walsh

Gardaí involved in the renewed investigation into the circumstances of a days-old baby boy found stabbed on a beach in Cahersiveen, Co Kerry in 1984, have confirmed they are aware of the discovery – 11 years later – of the body of another baby boy, also on a beach in nearby Waterville.

The identity of the parents of the baby found at Falveys’ beach in Ballinskelligs Bay on May 30th, 1995 has never been established.

The baby was found on the waterline, on the gravel where the tide had come in. He was discovered by the late Edward Falvey who lived nearby.

The coastguard attended the scene and called the baby Fionán after the local saint and coastal region. A priest baptised the baby and he is buried in the churchyard of St Finian’s Church at Spunkane, Waterville.

Tony Donnelly, a member of the coastguard at the time, erected a headstone with his name and looks after the grave.

“Sometimes you would see flowers there,” Mr Donnelly said.

An appeal by Mr Donnelly in 2015 for the parents to come forward with information elicited nothing.

On Thursday evening, Supt Flor Murphy, who is involved in the investigation into Baby John’s death, said gardaí were aware of the 1995 baby discovery and said “everything will be looked at”.

Meanwhile, a retired detective inspector in the Garda who was part of the so-called Murder Squad which investigated the Kerry Babies case in 1984, has repeated calls for the bodies of both the Cahersiveen baby and the baby found at Abbeydorney in the Hayes’ land to be exhumed so that new DNA analysis could be carried out.

Gerry O’Carroll was part of a team of detectives sent from Dublin to investigate the Kerry Babies case under Supt John Courtney in April 1984.

In an interview with the Kerryman newspaper this week, conducted after the apology by the Garda to Joanne Hayes, he said: “The only way we can conclusively put this to bed forever is for both bodies to be exhumed and for an outside agency such as Scotland Yard to carry out an completely independent DNA analysis of the remains.

“I would of course accept the outcome of any such investigation,” said Mr O’Carroll, a native of Listowel. Mr O’Carroll retired from An Garda Síochána in 2000 and became a columnist for the Evening Herald where he was a firm advocate of the theory that Ms Hayes had twins.

While the Garda declined to comment on Mr O’Carroll’s call for the remains of both babies to be exhumed for DNA analysis, privately a number of senior gardaí were slow to countenance the idea.

One source pointed out that the current DNA profile built up from a blood sample taken at postmortem from Baby John proved conclusively that he was not related to Ms Hayes.

The investigation team headed by Det Insp John Brennan of Tralee Garda Station with support from the Serious Crime Review Team headed by Det Chief Supt Walter O’Sullivan have made contact with a number of retired gardaí involved in the original inquiry.