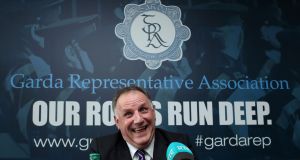 GRA general secretary Pat Ennis: in a row over pay, many were unhappy with how leadership handled the negotiations and he faced a no-confidence motion. Photograph: Conor Ó Mearáin

The leadership of the Garda Representative Association (GRA) is set to come under extreme pressure from its membership after the publication of a damning report.

A special delegate conference over two days next week will debate the report by Ampersand Consultants, which many members believed had exposed the GRA as a poorly- run organisation.

Members will also get the chance to vote to accept or reject its findings.

The consultants’ review found almost €660,000 was spent on expenses in 2016 by members of the association’s central executive committee. That figure represents one-quarter of the organisation’s income from members’ fees and government funding.

Much of the money is spent on subsistence and mileage; incurred by members travelling around their own divisions and driving to Dublin once a month for a two-day executive meeting.

Internal unrest has characterised much of the last two years since former general secretary PJ Stone retired after 19 years in the post. Pat Ennis won the vote to succeed him.

When the GRA and Association of Garda Sergeants and Inspectors threatened a strike action in November 2016 in a row over pay, many in the GRA were unhappy with the way its leadership handled the negotiations.

Mr Ennis faced a no-confidence motion, which he survived. However, it was later agreed consultants be engaged to review the entire workings of the association.

The report has suggested the association is “dysfunctional” in places and that its 31-member executive is bloated and needs to be cut to 12 members.

It is also critical of in-fighting in the association’s executive, adding it is perceived by its members as being “out of touch” as well as “a closed shop”.

There is also a “club within a club” where internal loyalties determines who gets what. There was just one woman on the 31-member central executive despite the GRA’s membership being 27 per cent female.

One member interviewed for the review said: “The bickering, cliques, self-interest, argument, in-fighting and conflict are evident to everyone and unacceptable, and a waste of members’ money.”

GRA divisional representatives questioned “value for money on expenditure”. According to the report they were also “generally outraged (but weary) at the ‘discretionary’ spending of members’ contributions on ‘gifts’”.

Elected officials were not trained and mostly worked part-time and unpaid. Yet they were charged with advising and assisting the rank-and-file gardaí who make up the membership of the organisation on a broad range of issues.