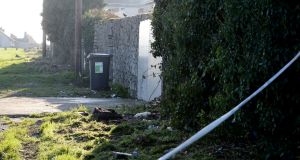 The crime scene at Rathmullen Park in Drogheda, Co Louth, where it is believed teenager Keane Mulready-Woods was murdered. Photograph: Alan Betson

Gardaí are continuing the search for some of the remains of Keane Mulready-Woods a week after the murder of the 17-year-old as part of a worsening gangland feud in Drogheda, Co Louth.

Remains were found in a bag on the Moatview estate in Darndale, north Dublin, last Monday at about 10pm. More remains were discovered in a stolen car that was found ablaze on a laneway near Croke Park in Dublin’s north inner city early on Wednesday.

Not all of the body has been found and the search continued over the weekend. It was unclear if Keane’s family would hold a funeral in coming days or wait until the rest of his remains have been found.

Gardaí believe the gang that murdered and dismembered Keane’s was planning to dump some of his body outside the Co Louth home of a senior criminal aligned to a rival gang in the Drogheda feud.

However, that plan appears to have been abandoned, possibly because of Garda activity in the area where the criminal lives.

Gardaí have not discounted the possibility that the limbs found in Darndale were deliberately left there as a threat to criminals from the area, who are aligned to the same Drogheda gang as the late teenager.

His murder was the third killing in the Drogheda feud since it erupted in July 2018, while five other targets in the feud have survived being wounded.

Gardaí suspect the latest killing was done on the orders of a criminal from north Dublin who has lived in the northeast for years. That man was a close associate of Richard Carberry (39), who was shot dead in Bettystown, Co Meath, last November as part of the feud. Another associate, Keith Branigan (29), was murdered in Clogherhead, Co Louth, last August.

The criminal suspected of ordering Keane’s murder was incensed by Carberry’s killing and he had also been assaulted on the street in recent months by young criminals linked to the gang that murdered Carberry.

During that street attack the senior criminal’s flip flops were stolen from his gym bag. The group who assaulted the criminal then taunted him by photographing themselves in the flip flops in various locations over the following weeks and circulating the images via social media apps.

Gardaí are now investigating if that man ordered Keane’s murder as revenge for being attacked and ridiculed in addition to the murder of his associate Carberry. There are also serious fears for the safety of the young men who attacked the criminal as well as those pictured in the footwear.

The 17-year-old’s murder was the first time the other gang has killed someone in the course of the feud.