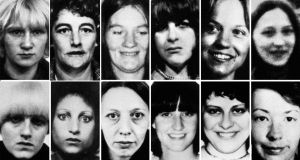 Peter Sutcliffe, the Yorkshire Ripper, is infamous for having killed 13 women but he also attacked other victims, who survived, including Irish woman Anna Brosnan who had emigrated from Co Kerry to Britain as a teenager.

Now deceased 12 years, Anna Brosnan was Sutcliffe’s first victim after he propositioned her on the street before following her, attacking her and leaving her for dead on the street. She was found in an alleyway by her former partner and a teenage boy and, while she had suffered serious head injuries, including a broken skull, she survived and recovered.

In 1981, then aged 42 and working in Woolworths, she attended Sutcliffe’s trial at the Old Bailey after it had been established during the police investigation that she was his first victim. She was one of seven women attacked by Sutcliffe but who survived.

Anna Patricia Brosnan was originally from Tralee in Co Kerry and was one of 12 siblings. She went live in England in 1948, aged 15 years; settling in Keighley, Yorkshire, where her older sister had settled. She met fellow immigrant Roman Rogulskyj, a Ukrainian, working in a local factory and they married in 1955 before divorcing 18 years later.

She became involved in a relationship with British man Geoffrey Hughes, who she later learned had been discharged from psychiatric care with a recommendation to “keep away from women” for a period of five years.

On July 4th, 1975, she and Hughes had a row and when she went out on her own that night and later returned home she realised Hughes had moved his personal effects out of her home and had also taken her car. She decided to challenge him at his home, a short walk away in Keighley, and while on her way there a man – later established as Peter Sutcliffe — propositioned her on the street asking her if she “fancied it”.

She declined his advances and continued her way to Hughes’s home where her calls to the door were not answered before she broke one of the windows with her shoe. As she make her way home, the man who had propositioned her minutes earlier did so again, with Anna Brosnan rejecting his advances again.

As she walked on, she was hit over the head with a heavy object, knocking her unconscious onto the ground. She was found unconscious by Hughes and a local teenager before being taken to hospital and undergoing surgery for her head wound.

She also had bruising to her hands and arm and had sustained scratches to her abdomen, though she had not been sexually assaulted and recovered from her physical injuries.

She died in 2008 aged 73 years and was profiled last year by author and journalist Carol Ann Lee in her book on all of Sutcliffe’s victims, Somebody’s Mother, Somebody’s Daughter.