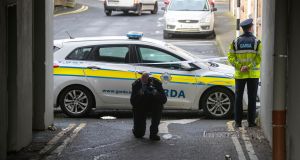 Gardai at the scene of a fatal hit and run in a laneway in Newbridge Co Kildare Photograph: Colin Keegan, Collins Dublin

A man arrested over a suspected hit and run collision which killed a mother of two in Newbridge, Co Kildare, has been released without charge.

The 48-year-old woman has been named locally as Ann Bathe, who was from the nearby town of Kilcullen.

The female pedestrian was knocked down in a suspected hit and run on Monday evening. Gardaí and emergency services were alerted shortly after 8pm when the woman was discovered with serious injuries on Thomas Street, in Newbridge town.

The woman was hit by a vehicle which then appears to have fled the scene afterwards. She was taken by ambulance to Naas General Hospital, but was pronounced dead a short time later.

Investigating gardaí arrested a man in his 50s on Tuesday in connection with the fatal traffic collision. He was held in Kildare Garda station and questioned over the suspected hit and run killing.

On Wednesday, a Garda spokesman said the man had been released without charge, but a file would be prepared for the Director of Public Prosecutions

Local Fine Gael councillor Ivan Keatley said the fatal traffic collision was a “tragedy” and the woman came from “a well-known family in Kilcullen,” which he described as a small, tight knit town.

An Garda Síochána are continuing to appeal for any witnesses to the road traffic collision to come forward. A Garda spokesman said “anyone who may have witnessed this incident or with camera footage (including dash cam) from the area at the time is asked to contact investigating gardaí”.