Flanagan ‘concerned’ by claims Garda did not investigate homicides 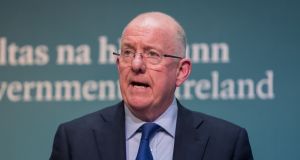 Minister of Justice Charlie Flanagan: “Any substantiated allegations of this kind would be very serious and a cause of grave public concern.” File photograph: Gareth Chaney Collins

Minister for Justice Charlie Flanagan has said he is “extremely concerned” at allegations that some unlawful deaths, or homicides, were not properly investigated.

“Any substantiated allegations of this kind would be very serious and a cause of grave public concern,” he said.

Mr Flanagan was responding to a report in The Irish Times on Friday about two Garda staff members having made protected disclosures alleging some homicides that were incorrectly classified as less serious crimes were not investigated as homicides.

The disclosures were made to members of the Joint Oireachtas Committee on Justice about two weeks ago. However, Mr Flanagan said in a statement that he had not seen any such protected disclosures.

Alan Kelly TD, who has seen the disclosures, earlier called on Mr Flanagan and Acting Garda Commissioner Dónall Ó Cualáin to comment on the matter given the seriousness of what was being alleged.

Mr Flanagan noted that difficulties with the classification, or recording, of homicides by the Garda had been known for some time.

He was referring to the fact that as far back as last April the Policing Authority began publicly questioning senior Garda officers about the accuracy of annual homicide figures and how individual cases were classified.

Senior Garda officers have consistently assured the Policing Authority that while there were mistakes made in classifying, or recording, some homicides; all of the cases were investigated in full as homicides.

A new dimension to the controversy has now emerged, with two Garda civilian staff members making protected disclosures and alleging homicides were both misclassified and, in some cases, were not afforded a full homicide inquiry.

Mr Flanagan described as “complex” the problems that emerged about nine months ago relating to the homicide classifications.

“It is essential to clearly establish the facts,” he said, adding he had no knowledge of any allegations that unlawful killings had not been properly investigated.

“Garda management are adamant that all unlawful killings are investigated,” he said.

“I have seen no evidence to the contrary but I have today asked An Garda Síochána for further formal assurances in this regard.”

He said since the shortcomings with the classification of homicides emerged some time ago, the Garda had worked with the Policing Authority, the Department of Justice and Central Statistics Office to resolve the problems.

He added the Government had set up the Policing Authority “to exercise rigorous independent oversight” of the Garda.

“The authority’s ongoing scrutiny of this issue is an example of oversight in action– their approach is professional and rigorous, it is not political,” he said.

“Their interest, and the interest of the Government, is to see this matter resolved as soon as possible. And I have made clear to the Garda Commissioner that more rapid progress is required.”

He added he was confident the Policing Authority would “deal with this issue comprehensively”.

He also pointed to the fact that the Central Statistics Office had already stopped publishing any more crime statistics until the homicide data problems are resolved.

“That says a lot, that the CSO do not believe the Garda Síochána. That’s extraordinary.”

He added the report in The Irish Times was “deadly accurate” and highlighted a very profound and serious issue.

Mr Kelly said the issues raised were so serious that Mr Ó Cualáin must immediately formally refer them to the Department of Justice and Mr Flanagan.

“This is very serious. The department and the Minister need to make a statement about how the department was managing the revelation,” he said.

“We can’t have a vacuum where public confidence is let drift. They have to come out and tell the truth, the whole, truth and nothing but the truth.

“This needs to be dealt with now. This is way too serious. It needs to be forensically gone through by the Policing Authority, the justice Oireachtas committee, the department. They need to go through this.”

Apology would help as focus now on being a mother to her young son, says Eileen Rushe