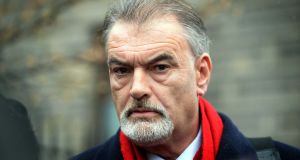 It remains open to Mr Bailey to appeal the matter to a higher court, but only on a point of law, not of fact or evidence. Photograph: Eric Luke.

English journalist Ian Bailey has expressed disappointment after a French court rejected his appeal against the decision by authorities in France to charge him over the death of French film producer, Sophie Toscan du Plantier.

Mr Bailey (61) said that he was “disappointed but not surprised” that the three-judge court, the Chambre d’Instruction, had found against him on his appeal against the decision by French magistrate, Nathalie Turquey, to indict him for voluntary homicide of Ms Toscan du Plantier.

Judge Turquey had indicted Mr Bailey in October 2016 for the voluntary homicide of Ms Toscan du Plantier (39) at her holiday home at Toormore near Schull in December 1996, but last March Mr Bailey lodged an appeal against the decision.

The judges of the Chambre d’Instruction heard submissions from both the prosecution and Mr Bailey’s lawyer, Dominique Tricaud, as well as lawyers for Mr Toscan du Plantier’s family last November, but reserved their judgement until today when they ruled against Mr Bailey.

It is still open to Mr Bailey to appeal the matter but only on a point of law, not of fact or evidence, to a higher court - the French equivalent of the Irish Supreme Court, the Cour de Cassation - but Mr Bailey refused to be drawn on this possibility when contacted by The Irish Times.

Mr Bailey said that he had spoken briefly this afternoon to Mr Tricaud who had informed of the decision of the Chambre d’Instruction but he wanted to speak with him further before making any decision about an appeal to the Cour de Cassation.

Mr Bailey was arrested by gardaí for questioning about the murder of Ms Toscan du Plantier in both February 1997 and January 1998 but released without charge on each occasion and the DPP later ruled that there was insufficient evidence to charge him with the murder of the film producer.

Mr Bailey, with an address at the Prairie, Liscaha in Schull, has denied any involvement in the murder of Ms Toscan du Plantier and also denied ever making any admissions that he killed the mother of one whose family have been over 20 years campaigning to have her killer brought to justice

Jean Antoine Bloc Daude of the Association for the Truth About the Murder of Sophie Toscan du Plantier (ASSOPH) welcomed today’s ruling by the French courts but said the family were bracing themselves for the possibility of Mr Bailey appealing the ruling to the Cour de Cassation.

“It’s great news for the family who have campaigned for so long for Sophie’s killer to be brought to justice but we still don’t know whether Ian Bailey is going to appeal the matter to the Supreme Court so there may be yet another chapter to this story before we get to trial,” he said.

Council takes legal action over street mural of David Attenborough 19:17
Ireland-Italy rugby match due to be called off over coronavirus risk 19:06
Watchdog ‘disappointed’ with review of State’s lobbying Act 19:05
Could Ireland put towns under lockdown if coronavirus arrived? 19:00
EU issues ultimatum to London ahead of Brexit talks 18:54