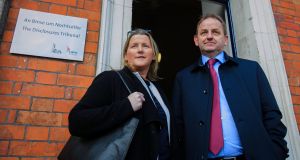 Maurice McCabe and his wife Lorraine at the Charleton Tribunal in Dublin Castle. Photograph: Collins

News reports in 2016 based on leaks from the O’Higgins Commission appeared to be an attempt to “re-run” what had happened at the commission’s private hearings, the then Tánaiste, Frances Fitzgerald, was told at the time, the Charleton Tribunal has heard.

The reports stated that the Garda whistleblower Sgt Maurice McCabe had produced a tape at the O’Higgins Commission which was in conflict with what the commission had been told the Garda evidence would be.

The media reports in May 2016, after the commission had ended, created a political and media storm and led to calls for the resignation of the then Garda Commissioner, Noirin O’Sullivan.

The tribunal is investigating whether unjustified grounds were used by Ms O’Sullivan at the commission hearings to discredit Sgt McCabe.

During the evidence on Tuesday of Chris Quattrociocchi, who was private secretary to Ms Fitzgerald in the Department of Justice in May 2016, the tribunal was shown an email sent to the minister by assistant secretary Ken O’Leary which referred to reports in the Sunday Independent.

Mr O’Leary wrote that he understood from Mr Quattrociocchi that Ms Fitzgerald wanted a note on the media reports about “tapes introduced in evidence at the O’Higgins Commission of Inquiry disproving the evidence of other gardai”.

“What appears to be happening is that ‘sources’ are putting about their version of what happened at the commission, despite that being unlawful, knowing full well that people who respect the law cannot respond,” Mr O’Leary said.

“While it might be idle to speculate about motivation, it would appear to be [an] attempt to re-run in public matters dealt with by the Commission on the basis of partial leaks.”

Mr O’Leary enclosed with his email references to the legal situation governing the confidentiality of what happened at commissions of investigation.

The tribunal has already heard from Ms O’Sullivan that she felt constrained at the time in responding to the media reports, because of the confidentiality restrictions that governed commission proceedings.

Inspector Michael McNamara was asked by Patrick Marrinan SC, for the tribunal, about his notes of a consultation held on May 12th, 2015, by members of Ms O’Sullivan’s legal team at the commission.

He said it was Inspector Noel Cunningham who would have told the legal team about a meeting in Mullingar in 2008. The 2008 meeting was attended by Inspt Cunningham, Sgt McCabe, and Sgt Yvonne Martin and was secretly recorded by Sgt McCabe.

During the Mullingar meeting there was discussion of a report made to Supt Michael Clancy by Sgt McCabe.

Made ‘to’ Supt Clancy

The note from the 2015 consultation with Ms O’Sullivan’s lawyers written by Inspt McNamara recorded there had been mention at the Mullingar meeting of the report being made “to” Supt Clancy.

In a submission made a few days later to the commission by the Garda Commissioner’s legal team, there was a reference to a complaint being made “against” Supt Clancy by Sgt McCabe.

The submission purported to outline the reasons why Ms O’Sullivan’s legal team believed it should be allowed challenge the motivation of Sgt McCabe at the commission hearings. The incorrect version of events suggested Sgt McCabe had made a complaint in bad faith.

The incorrect claim was subsequently put to Sgt McCabe in evidence by lead counsel for Ms O’Sullivan, Colm Smyth SC, at the commission hearings. Sgt McCabe responded that the allegation was “absolutely false”.

Sgt McCabe later produced the transcript of his tape of the Mullingar meeting to show that the Garda submission was incorrect, a point which was acknowledged by Supt Cunningham when he was giving evidence at the commission.

At earlier tribunal sittings Mr Smyth said the error in the submission given to the commission was not the fault of counsel and was based on instructions. The solicitor who acted for Ms O’Sullivan’s legal team, Annmarie Ryan of the Chief State Solicitor’s office, has given evidence that her notes show Supt Cunningham telling the legal team on May 12th, 2015, that the report had been made “to” Supt Clancy.

She has also said that a report from 2008 compiled by Supt Cunningham at the time of the Mullingar meeting, and which agreed with the transcript from Sgt McCabe’s tape, had been given to the commission at around the same time as the incorrect submission from Ms O’Sullivan’s legal team. This was before Sgt McCabe revealed he had taped the Mullingar meeting.

The submission from Ms O’Sullivan’s legal team was reviewed by a number of Garda witnesses before it was given to the commission on May 18th, 2015, and the error contained in it was later repeated in another document submitted on behalf of Ms O’Sullivan.

Ms O’Sullivan has told the tribunal that she never reviewed either document and had not met with her legal team prior to the drafting of the document containing the error.

The tribunal has also heard that Sgt Martin was never consulted by Ms O’Sullivan’s legal team. During his evidence Mr Quattrociocchi confirmed to Kathleen Leader BL, for the tribunal, that Ms Fitzgerald would have seen an email sent on May 15th, 2015, which alerted her to a dispute that had arisen at the commission hearings about the approach being taken by Ms O’Sullivan’s legal team towards Sgt McCabe.

A controversy late last year over what Ms Fitzgerald knew at the time about Ms O’Sullivan’s legal team’s strategy at the commission, almost led to the collapse of the Government and saw Ms Fitzgerald resign as Tánaiste.

Mr Quattrociocchi said Ms Fitzgerald returned to him on May 28th a printed out copy of the email which he had given her, and that he placed it in the files. The evidence continues.