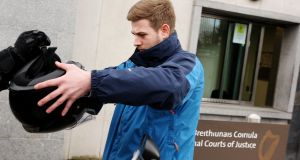 Patrick Hutch leaves the Special Criminal Court after all charges were dropped against him regarding the Regency Hotel murder. Photograph: Padraig O’Reilly

Garda Headquarters and the Garda Síochána Ombudsman Commission (Gsoc) are to carry out separate inquiries into the collapse of the trial on Wednesday of Patrick Hutch for the Regency Hotel murder of David Byrne.

Garda Commissioner Drew Harris is also set to appear before the Policing Authority in private session next week when he is expected to be asked questions about the case.

It has emerged that among the notes of Det Supt Colm Fox, who led the Byrne murder investigation and subsequently took his own life, was one referring to an error of judgement which appears to relate to the inquiry under his management.

Det Supt Fox was found dead in his office at Ballymun Garda station last February after the trial of Patrick Hutch had already begun. Neither foul play nor third-party involvement was suspected in his death, which was treated as a personal tragedy.

And because he could not answer questions at the trial about his notes and other evidence, the trial process could go no further. The State entered a nolle prosequi (declaring its intention not to proceed) before the Special Criminal Court on Wendesday.

Patrick Hutch (26), of Champion’s Ave, Dublin 1, could in theory go on trial again for the murder of David Byrne (32), from Crumlin, Dublin 12 if new evidence emerged. However, such a move is not anticipated.

Byrne was a drug dealer linked to the Kinahan cartel. He was gunned down in February 2016, when a five-man armed gang stormed into a boxing tournament weigh-in at the Regency Hotel in Whitehall, Dublin.

The gunmen wanted to shoot drug dealer Daniel Kinahan in revenge for the murder of Gary Hutch (34) in Spain in September 2015. But when Kinahan fled the hotel, Byrne was shot dead and two other men were wounded.

Three years on and a total of 16 people, including Gary Hutch and David Byrne, have been killed in what has become known as the Kinahan-Hutch feud. Gardaí fear the collapse of the murder trial will lead to a fresh wave of Kinahan on Hutch violence.

The Director of Public Prosecutions had contended that Patrick Hutch was the person captured in media photographs running from the Regency Hotel murder scene dressed as a woman and carrying a handgun, though he denied this.

The manner in which Hutch was identified by Garda members from the photographs became contentious during the trial, though the identification was eventually allowed into evidence.

But when Det Supt Fox died the case was thrown into doubt and after lengthy adjournments it came to an end on Wednesday.

Patrick Hutch, who had been on remand in prison, was free to leave the court; exiting through a side door of the Courts of Criminal Justice, Dublin, and leaving on a motorbike.

Byrne’s family, including parents James and Sadie Byrne, expressed their anger outside the court.

Minister for Justice Charlie Flanagan has requested the commissioner carry out a review “to ascertain what lessons (could be) learned from the collapse of this trial”.

Gsoc told The Irish Times that it had been carrying out an investigation into the death of Det Supt Colm Fox, as it does with any Garda member who dies or is seriously injured on duty.

But yesterday it said it had “moved”, or upgraded, that “to an investigation into the circumstances giving rise to the death of the late Det Supt Fox”.

While it did not comment further on that point, the new inquiry is wider and can explore what influence the Byrne murder inquiry and the Patrick Hutch trial may have had on his death and why.