Interim committee would focus on whiplash and other soft-tissue injuries 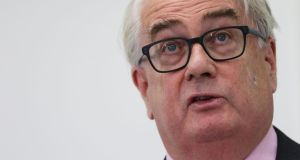 Chief Justice Frank Clarke has been asked to propose a committee to examine soft-tissue injuries so new figures can be included in Personal Injury Assessment Board guidelines. Photograph: Nick Bradshaw

The Chief Justice has been asked by Minister for Justice Charlie Flanagan to create simple rules to force through rapid reductions in awards for soft-tissue injuries such as whiplash.

Last September the Personal Injuries Commission (PIC) found that the payouts for whiplash and other soft tissue injuries are four or five times those in the UK.

The Government has committed to reducing personal injury payouts found by the PIC to be “out of kilter” with other countries. However, it has since been criticised by road users and insurance companies for the slow pace of reform.

It was previously agreed that the judicial council proposed in pending legislation should compile guidelines for personal injury payouts by the courts.

However the Judicial Council Bill, along with the associated Judicial Appointments Bill, has been the subject of ardent opposition in the Oireachtas, meaning it has made little progress since November 2017.

In the interim the PIC and Minister of State in the Department of Finance Michael D’Arcy have proposed the establishment of a temporary, non-statutory committee as a stopgap measure to deal with the most pressing areas of personal injury payments.

On Wednesday, Mr Flanagan set this process in motion by writing to Chief Justice Frank Clarke to propose a committee be established to examine soft-tissue injuries so new figures can be included in the Personal Injury Assessment Board’s (PIAB) next set of guidelines (known as the book of quantum) which is due later this year.

This committee would be composed of judges with experience in personal injury cases, Court Service and Department of Justice staff and representatives of PIAB, Mr Flanagan suggested in the letter seen by The Irish Times.

The committee would consider the PIC’s findings that current payouts are multiples of those in other countries as well as recent judgments from the Court of Appeal reducing payouts in soft-tissue personal injury cases.

Mr Flanagan said the issue of soft-tissue injury payouts is of the most immediate and pressing concern and that a reassessment would be a relatively small-scale and manageable exercise “which could be completed quite quickly”.

Soft-tissue injuries, including whiplash, take up just one or two pages of PIAB’s current guidelines, he said.

Once the issue of soft-tissue injuries is dealt with, the judges on the interim committee could identify other personal injury costs in need of urgent reform, the Minister suggested. This could be done immediately after the personal injuries reform or later in the year, he said.

This function would then be taken over by the Judicial Council once the establishing legislation is passed.

The Chief Justice has already been contacted by PIAB with the same request as Mr Flanagan. He is expected to agree to the process and move it forward in the coming weeks.

1 Woman stranded in Ireland due to pandemic has ‘miracle baby’
2 ‘Difficult months ahead’: Europe prepares for more pain as Covid cases soar
3 Almost 20% of staff at Dublin hospital have antibody evidence of Covid-19 infection
4 Two hundred Irish retailers for all your online Christmas shopping
5 Covid-19: Critical cases from NI could put pressure on services in Republic
Real news has value SUBSCRIBE