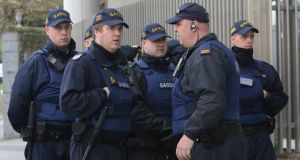 The fallout from the collapse of the trial of Patrick Hutch for the murder of David Byrne is only just starting and is likely to be bloody and difficult.

It looks set to reverberate around Garda Headquarters and the Department of Justice for some time. But the potential for an immediate explosion of violence on the streets of Dublin is perhaps most pressing.

Garda officers now fear the highly charged trial, especially its collapse, will spill over into extreme violence on the streets with a fresh round of bloodshed in the Kinahan-Hutch feud.

A further seven men would die by the end of that year, an average of almost a murder a month by the Kinahan cartel on the Hutch faction. And gardaí believe most, if not all, of the killing was motivated by the desire to avenge the Byrne murder.

Garda sources believe Byrne’s associates will now be so enraged at the collapse of the trial they will want to strike out against the Hutchs immediately; to keep them in fear of their lives and remind them who has the upper hand.

A large team of gardaí, including armed members, was clearly visible in the Courts of Criminal Justice on Wednesday over fears the collapse of the trial, which has long been anticipated, might flare into serious disorder inside the court building.

Some Hutch family members also still have gardaí posted on the streets outside their homes; a familiar sight for the three years that have passed since the Regency Hotel attack.

However, many planned attacks have been thwarted by successful policing. And some of the senior members of the Kinahan organisation are now serving prison sentences of up to life or awaiting trial on serious charges.

Detectives say any surge in violence in the aftermath of the collapse of the trial will bring with it the opportunity to jail more gang members because the feud is now so intensely policed.

With a Garda review now underway into the collapse of the case, there may also be difficult times ahead for An Garda Síochána.

Most immediately Garda Commissioner Drew Harris is set to face questions about the Garda’s handling of the Byrne murder investigation in a private session with the Policing Authority next Thursday. And a session in public, where senior officers would be asked to disclose more detail than has come to light so far, may follow.

Minister for Justice Charlie Flanagan has asked the commissioner to conduct a review into what lessons might be learned for the Garda from the collapse of the trial and to report back any conclusions.

For senior Garda management and for Mr Flanagan the case is a sensitive one as the man who led the investigation into the murder took his own life 12 months ago.

Det Supt Colm Fox was found dead in his office in Ballymun Garda station, in north Dublin, on February 10th, 2018. His official firearm was recovered at the scene, foul play was not suspected and it was treated as a personal tragedy.

The Patrick Hutch murder trial was adjourned as Det Supt Fox’s death was investigated. That involved a review of emails related to the Byrne case between four Garda members.

Notes discovered after Det Supt Fox’s tragic death are also said to refer to a “grave error of judgement”.

But who or what that relates to is not clear. And detail around that may be sought by the Policing Authority or may emerge from the “lessons learned review”.

Putting aside these difficult aspects of the case for the Garda, the situation on the streets is now of huge concern.

The Kinahan-Hutch feud, as it has become known, effectively began in September, 2015, with the murder of Dublin criminal Gary Hutch (34) in southern Spain.

He had been a member of the Kinahan international drugs cartel headed by veteran Dublin drug dealer Christy Kinahan who ran a drugs wholesale operation, supplying gangs in Ireland, the UK and other parts of Europe.

Gary Hutch invested the proceeds of an armed robbery in the cartel’s operation but he clashed with Daniel Kinahan, the son of the cartel leader. And when he tried to shoot dead Daniel Kinahan in the summer of 2015 and missed, he was killed himself in revenge despite his family in Dublin paying €200,000 to the cartel to secure his safety.

Some six months after Gary Hutch’s murder, a group of his associates stormed a boxing tournament weigh-in at the Regency Hotel, Whitehall, north Dublin, looking for Daniel Kinahan who was present.

Patrick Hutch was charged with his murder and put on trial. But the death of the lead investigator greatly complicated and delayed the trial and now it has collapsed, with Hutch walking free.

The 26-year-old from Dublin’s north inner city was known to gardaí before the Byrne murder for only very minor matters.

Other members of the feuding factions are now living abroad, in the UK and Spain, while the Kinahans have decamped from Spain to Dubai.

But in their absence there is no shortage of men living in Dublin who will carry out shootings, up to and including gun murders, for payment. Gardaí are now fearful people associated with both factions will be targeted.

Most of the violence to date has been perpetrated by the Kinahan side in attacks on the Hutch side and that dynamic is likely to continue.

Soft targets – people associated with the Hutch family but who are not involved in feud violence – will be most at risk along with some Hutch family members who do not have the resources to flee abroad.

1 Tyrone midwife on the cover of Vogue magazine
2 Donald Trump is in trouble, and that could spell very bad news
3 Trump’s claim it was a ‘great day’ for George Floyd is criticised
4 ‘White Irish people have never had to think about this’
5 Pubs reopening will not mean ‘fellas having a few pints and peanuts’, Holohan warns
Real news has value SUBSCRIBE