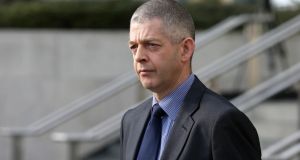 The trial of Patrick Hutch for the murder of David Byrne was highly unusual in that photographs were the key evidence. And those pictures were taken by the media and secured under warrant by the Garda team investigating the killing.

The pictures captured two men running from the murder scene. Both were carrying handguns.

One of the men was dressed as a woman with a long-haired wig and make-up, and the other man was wearing a flat cap.

The photographs were taken by a photographer working for The Sunday World.

Staff from the newspaper had gone to a boxing tournament weigh-in at the Regency Hotel in Whitehall, north Dublin, on the day of the killing three years ago – February 5th, 2016 – because of the people they suspected would be present.

Gang leader Daniel Kinahan was linked to the MGM promotions company that was promoting the Clash of the Clans boxing tournament and the newspaper wanted to photograph him.

However, when five armed men – including three dressed as gardaí and carrying AK-47s – stormed the venue, the photographers and journalists looking on outside saw a very different story unfold before their eyes.

The gunmen were targeting Daniel Kinahan and wanted to shoot him in revenge for Dublin criminal Gary Hutch’s murder in Spain in September, 2015.

However, when Kinahan fled to safety from the venue, his associate David Byrne (32), from Crumlin, Dublin, was shot dead and two other men were wounded.

In the case that collapsed on Wednesday, the DPP contended the man dressed as a woman was Patrick Hutch (26), Champion’s Ave, Dublin 1.

The man wearing the cap was identified by PSNI officers as Kevin Murray from Strabane, Co Tyrone, who died from motor neuron disease aged 46 years, some 18 months after the Byrne murder.

Because the images of the two men running from the crime scene were the key evidence on which the case would be decided, they came under intense scrutiny.

From the outset there were concerns within Garda circles about the evidential value of the photographs.

Officers said many people, and sections of the media, assumed the photographs would result in a speedy conviction. But they added the images were not regarded within the Garda as being of such high value.

However, the case has now collapsed because Det Supt Colm Fox, who led the murder investigation, took his own life 12 months ago rather than any issue with the contentious photographs.

He had left notes about the case that he could not be questioned about in court and so the trial process could go no further.

There were no records of precisely how many gardaí viewed the photographs or if they reached the conclusion the man dressed as a woman was somebody other than Patrick Hutch.

But the two Garda members who did identify Patrick Hutch insisted they had done so independently of each other.

In January of last year Det Garda Jonathan Brady told prosecuting counsel Sean Gillane SC that two days after the fatal shooting he went with his colleague, Det Garda Fergal O’Flaherty, to Ballymun Garda station, where they viewed the photographs.

They both said they viewed the photographs independently of each other and identified Patrick Hutch as the man dressed as a woman.

Michael O’Higgins SC, for Patrick Hutch, mounted legal argument in a bid to stop the photographs being admitted as evidence because the way the images were handled, he claimed, was very poor and marked by no record keeping.

However, Mr Justice Tony Hunt, presiding at the three-judge court, ruled the images should be admitted as evidence.