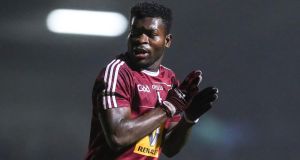 Westmeath county footballer Boidu Sayeh regularly experiences racism online. ‘You can’t do anything about it, you just need to soak it in.’ Photograph: James Crombie/Inpho

The Government has launched a wide-ranging public consultation process ahead of an expected strengthening of hate-speech laws and the introduction of a specific new offence of “hate crime”.

Minister for Justice Charlie Flanagan has said he favours revising the current incitement-to-hatred legislation to make it easier to prosecute and secure convictions.

According to the Department of Justice there have been 55 prosecutions for incitement to hatred since the law was introduced in 1989. There have been five convictions under the Act, translating to a conviction rate of less than 10 per cent.

The Act makes it an offence to create or distribute racist, homophobic and other discriminatory materials.

Offenders face a maximum of two years in prison and a fine of €10,000 but it has proven difficult to secure convictions at trial. Many cases are dropped at an early stage and those that progress are usually dismissed or struck out by the judge.

Launching the public consultation on Thursday, the Minister said the current law was weak. “We’re anxious to ensure that our laws are robust to meet the needs of modern-day living.”

The first phase of the consultation concerns hate speech, an area currently covered by the Incitement to Hatred Act. From today the public will be able to fill out a questionnaire on the Department of Justice website, sharing their views and experiences of hate speech.

Workshops will then be set up around the country to hear from minority communities on the subject. The department will also invite detailed submissions from academics and experts in the area.

“My aim in this entire process is to ensure that anyone who is subject to hate speech, or indeed an incident of hate crime, can be clear that they are fully supported by the laws of the land,” Mr Flanagan said.

He said legislators would have to strike a balance between ensuring legitimate freedom of expression and “tackling unacceptable or criminal behaviour that can have devastating consequences for victims”.

The second stage of the process will begin in 2020 and will examine the need for a specific offence of hate crime. Ireland is one of the few European countries without hate crime legislation.

The proposed legislation will cover offences such as assault, criminal damage and threats that have a racist, sectarian or discriminatory dimension.

Mr Flanagan said he was “very concerned” about the amount of hate speech online and that social media companies based in Ireland must accept their responsibilities in this area “and act in a more responsible manner”.

Westmeath county footballer Boidu Sayeh says he regularly experiences racism online. “You can’t do anything about it, you just need to soak it in. Now hopefully something is being done about it.”

Dr Sindy Joyce, a Traveller and member of the Council of State, said her community had experienced racism for many years and it was only now the public seemed to be waking up to it.

“A lot of people believe that the racism that we experience and the hate that we experience is actually not racism or hate at all, that it actually somehow comes down to ourselves, that it’s our own fault. So it becomes victim-blaming, and I suppose it’s constant, into a cycle, a never-ending cycle.”

“We have been not only [been] discriminated against, but marginalised and isolated, and shut off from society. For a long time we were told that we were somehow broken, failed settled people.”

Asked about the current protests against direct provision centres around the country, Mr Flanagan said people had “nothing to fear” from asylum seekers but acknowledged a need to provide information on planned centres.

He said a centre planned for Achill Island would be temporary in nature and accommodate about 40 people. It would be supported “by a suite of services”, he said.

Asked about efforts by far-right anti-immigration activists to steer the debate in such communities, the Minister said he was concerned about “a small number of people, however vociferous they might be, who are engaged in whipping up fears”.