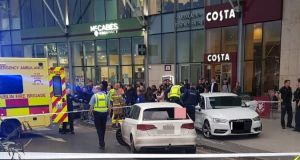 Emergency personnel on the scene of an incident in Citywest shopping centre on Wednesday. Photograph: Dublin Fire Brigade

A computer science student intentionally drove a car into a man outside Citywest shopping centre in Dublin, a court has heard.

A man in his 20s was injured when he was hit by an Audi during an incident at about 5.30pm on Wednesday. The driver was restrained by onlookers.

The alleged victim was taken to Tallaght University Hospital for treatment to his injures, which were not life threatening.

Alegranto Kongolo (23), was granted bail under strict terms after he appeared at Dublin District Court on Thursday charged with four serious offences in connection with the incident.

Mr Kongolo, with an address at Rossfield Park, Tallaght, Dublin was charged with assault causing harm to a named man, endangerment of life, criminal damage and production of a claw hammer as a weapon during the incident.

Garda Daniel McFeeley told Judge Colin Daly that Mr Kongolo was arrested 5.45pm at the shopping centre and made no reply when he was later charged at Tallaght Garda station.

The garda applied for a remand in custody adding that there was an objection to bail on the grounds of flight risk and the seriousness of the case.

Garda McFeeley said the accused was caught red-handed. It was alleged he intentionally drove a car into the injured party who is now in hospital.

The garda said the incident was captured on CCTV and the accused made admissions. He said the complainant was known to the Mr Kongolo and he feared the accused would intimidate him, and witnesses.

The charges can carry maximum sentences ranging from five to 10 years, the court heard.

Judge Daly granted bail on Mr Kongolo’s own bond of €500 and said there must be a €250 cash lodgement.

He ordered the accused to reside at his current address and notify gardai of any change, sign on daily at Tallaght Garda station, obey a 10pm-6am curfew and to must stay away from the alleged injured party and not have any contact with him.

The accused was also ordered to surrender his passport and not to apply for alternative travel documents. The judge noted he had an Irish passport and did not hold dual citizenship.

Mr Kongolo was remanded on bail and ordered to appear at Tallaght District Court on December 19th for directions from the Director of Public Prosecutions.

1 Coronavirus: Husband unable to say farewell to wife of 51 years
2 Coronavirus: Ten more deaths confirmed in Republic
3 Trump boasts of coronavirus ‘ratings’ as top expert warns of up to 200,000 US deaths
4 Maureen Dowd: Coronavirus has made a national shrink of Andrew Cuomo
5 People should carry ‘evidence’ of travel reasons if exceeding 2km limit
Real news has value SUBSCRIBE