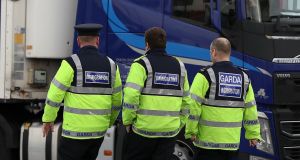 Garda immigration officers at Dublin Port which is thought to have been used by the lorry which subsequently collected the trailer in which 39 people were found dead. Photograph: PA

When the lorry supposed to contain furniture parts from Milan was opened, the unsuspecting driver at Rosslare Port was greeted with a “nightmare of human misery”, as gardaí later termed it.

In Italy in November 2011, 13 Turkish and Algerian migrants - men, women and four children - had been loaded into the container by an Eastern European smuggling gang.

It left Milan on a train that passed through Switzerland, France and Belgium before arriving at the Belgian port of Zeebrugge. From there the container was loaded onto a ferry to Waterford; for a stormy 50-hour journey.

Once the container landed in Ireland it was collected by the truck driver who investigated when he heard banging coming from the container.

By the time the doors were opened it was too late for eight of the migrants inside.

They had died from suffocation. Though the remaining five were in an extremely poor condition, with hypothermia and dehydration, they survived.

Seven men, including two Serbian gang leaders, were convicted in a court in Bruges two years later though the two Serbs had fled and evaded justice. The trial heard how migrants paid the gang €15,000 each for their transit and how the gang generated €12 million per year from trafficking.

It was a case that shocked Ireland at the time and appeared to conform to the stereotypical view of human trafficking; perpetrated by ruthless gangs exploiting poor and vulnerable migrants desperate to get to Ireland or Britain.

However, security sources in Ireland say this stereotype type is lazy and outdated.

While human smuggling and trafficking in truck containers continues - as proven by the latest case this week in Essex involving 39 dead Chinese migrants - Garda sources say modern trafficking in Ireland takes many forms.

The bodies of the Chinese people were found in what is understood to be an Irish-owned refrigerated trailer being pulled by an Irish-owned truck driven by a 25-year-old man from Northern Ireland who departed Dublin Port for Holyhead last weekend.

He was being questioned by Essex Police for a second day on Thursday after his arrest on suspicion of the murders of the dead migrants.

Searches were being carried out in Armagh by the PSNI at addresses linked to the arrested man and the Garda was also aiding the investigation.

While nothing has been proven against the arrested man or the Irish haulage company he is believed to work for, the case has brought people smuggling back into sharp focus in Ireland and Britain.

One security source says: “we have had cases of people paying to be transported secretly into Ireland and that transport element is the whole transaction, if you could call it that”.

“But a lot of trafficking is based on what you would call labour and exploitation. And that can involve people being brought in illegally to work in car washes, construction or even watering crops of cannabis in growhouses.

“There has also been a big issue around the world with women being trafficked and exploited to work as prostitutes. And we have seen our fair share of that in Ireland down the years.”

Other sources point out that international gangs were also now adept at more nuanced and lucrative trafficking and immigration-based crimes.

In one case last year when gardaí raided a company in Leinster involved in the catering sector a number of staff, from Asia and Africa, were found to have no legal standing in Ireland.

Some had entered the Republic illegally and were completely unknown to the Irish authorities.

Others were failed asylum seekers who should have departed the Republic but had not done so and were working for the company.

“It would be wrong to assume that only foreign gangs are involved,” said one source. “There have been plenty of cases where people smuggled into the country have been found working for Irish people who know well (their employees) were illegal.”

Other scams have involved public servants selling false documents to foreign nationals that can be used to secure passports or other documents allowing them bypass the immigration system.

In other cases staff at airport or ports of entry in Ireland have assisted arriving migrants with no permission to enter or stay in Ireland to avoid immigration checks.

“Those types of scams can involve a steady flow of people but take a long time before its detected and the money that changes hands can be significant,” said one source.

Another agreed, saying: “Some men have paid €20,000 for a sham marriage to a European woman in Dublin. At the end of it they believe they’ll be able to stay in Europe forever. So they raise the money to get that better life.”

Senior Garda sources have long been concerned that one impact of Brexit could see Ireland being used as a staging post for trafficking and immigration crime more frequently.

“It has already become harder to get into Britain or to stay there on student visas and the like and after Brexit you’d have to expect those controls are only going to get stronger. We think that is going to have some impact here,” said a security source in Dublin.

Gardaí are concerned that smuggling gangs, including Irish criminals, may seek to smuggle migrants to Britain via Ireland.

This, sources said, would be based on the perception that getting illegal migrants through Irish ports would be easier than negotiating a perceived increase in immigration and security checks at British ports after Brexit.

“Once they are in Ireland the last part of the journey would be by ferry from Dublin to Holyhead or from the North to Scotland,” said another source. “And, again, because you have the Common Travel Area, that journey on the boat may be seen as your best chance of not being detected.”

Gardaí also suspect some desperate migrants intending to get into Britain may seek to exploit the Irish asylum seeker system.

That would, sources said, involve travelling to Ireland and claiming asylum here before disappearing from the Irish system after “sneaking into Britain” on a ferry.

“It would be one way of doing it,” said a Garda source. “And wherever these gangs, our own people or foreign gangs, see they can make money from these kinds of trafficking scams they will try it. So we will have to be vigilant and see if Brexit makes (Ireland) more attractive as a staging post for Britain.”