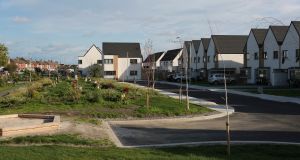 Gangland criminals who extorted over €550,000 from construction companies in west Dublin had their accounts frozen by the Criminal Assets Bureau as it investigated the case but opened new accounts and the flow of money from the companies started again immediately.

The payments continued uninterrupted even when the man who ran the extortion and arranged the payments, drug gang enforcer David Reilly, was in prison for a period.

The three companies who paid the men the money did not give formal statements to Cab because they were too fearful they would face repercussions from the men, Reilly and the leader of the gang he was aligned to, Derek ‘Dee Dee’ O’Driscoll.

Meanwhile, the Minister for Housing, Eoghan Murphy, has announced an independent investigation into the extortion on the Dublin City Council sites in Cherry Orchard.

Mr Murphy yesterday said the matter was being treated seriously in Government and indicated that “further steps will be taken as necessary on completion of the investigation”.

Fianna Fáil has accused of the Government of “doing nothing” about the problem despite the fact three ministers – including the former housing minister Simon Coveney – were written to by Sinn Féin TD Aengus Ó Snodaigh in 2016 who informed them of criminal interference on building sites. Mr Coveney has insisted that he was not personally aware of the issue until this week.

While they have been better known from drug dealing for most of the past two decades, when building work got under way on a number of Dublin City Council housing schemes in Cherry Orchard they targeted contractors on the sites.

Gardaí believe the men directed others under their control to attack the construction sites. This included arson attacks on plant machinery and Portakabins and driving stolen cars in the perimeter fencing around the sites.

Reilly then offered his and O’Driscoll’s “fence maintenance” services, saying if the contractors paid them thousands of euro each week the attacks would stop. For the companies that agreed and began paying, the attacks ceased immediately and never occurred again.

For those who initially declined to pay, the antisocial-behaviour attacks continued until the companies relented and paid, at which point the violence ended immediately.