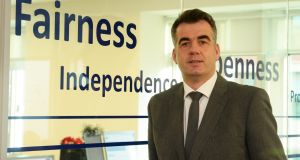 The Charities Regulator has opened an inquiry into financial irregularities at a Dublin online charitable donations firm after it emerged that the company failed to pass on €3.8 million raised for charities.

The investigation into Swiss-based Ammado, which links donors with charities via its online platform, began after the International Federation of the Red Cross made a complaint following a missed payment.

The Geneva-based federation alerted the Irish Red Cross and its other national charities in April 2017 about “business conduct issues” with Ammado, the online platform founded by Co Leitrim entrepreneur Peter Conlon.

They were advised to suspend immediately their use of the online platform.

The charity made a criminal complaint to the Swiss authorities about the platform in November 2017.

The federation said that it was “deeply disturbed” that about 1.8 million Swiss francs (€1.6 million) in online donations “collected by Ammado to support humanitarian efforts have not reached those intended”.

It said that it would cooperate in any way with the investigation by a Swiss public prosecutor to recover the funds.

The High Court heard this week that Mr Conlon (63), of St Mary’s Road, Ballsbridge, Dublin 4, had “gone missing” and may have been detained by authorities in Switzerland, where has been living in recent years.

The Irish Red Cross said it did not pass the federation’s concerns on to the regulator last year as Ammado was not a registered charity and so fell outside the regulator’s remit, and because none of its donations were lost.

It said that it was in contact with Pembroke’s liquidator Myles Kirby of Dublin accountancy firm Kirby Healy and had started an investigation into the affair.

“We have opened an inquiry and are currently considering the extent to which any issues may arise under the Charities Act 2009,” a spokeswoman for the regulator said.