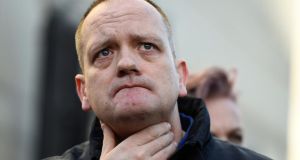 A murderous loyalist-paramilitary chief turned state informer will walk free as part of a deal to turn state’s evidence, the son of one of his victims has said.

Gary Haggarty (46) was a “serial killer” whom police allowed to murder at will, Kieran Fox claimed. Haggarty was jailed for at least 6½ years at Belfast Crown Court on Monday after admitting more than 200 offences, including five murders. Mr Fox’s workman father, Eamon Fox, was shot dead in a sectarian Ulster Volunteer Force murder in May 1994. Haggarty organised the weapon and walked the gunman to the scene.

Mr Fox asked: “What is justice in this country? It is just designed to look after the criminal. How can a man convicted of that many crimes be set free? The man is a serial killer; he was a paid state informer; he was allowed to kill at will. Police knew he was killing at will and let it continue.”

After 6½ years Haggarty will be entitled to consideration for release by the Parole Commissioners as part of the peace-process deal involving a heavily discounted sentence in exchange for giving information about his criminal colleagues. He has already served 1,186 days in prison on remand, however, and is entitled to credit for that. Haggarty’s evidence has led to one person’s being charged with murder.

The five victims whom Haggarty has admitted killing are:

John Harbinson, who was beaten to death with a hammer by a UVF gang in north Belfast in May 1997. Afterwards Haggarty went for a drink in a nearby house, the judge said.

Sean McParland, a Catholic who was shot dead in front of children in 1994. Haggarty volunteered to be the lead gunman to dispel UVF suspicions about informers, the judge said. Mr Justice Colton said an eyewitness account showed: “He could see his grandad in the living room who had started to bend down and was flapping his arms. He was unable to speak because of a recent operation for throat cancer.”

Sean McDermott, a 37-year-old Catholic found shot dead in his car near Antrim in August 1994.

Haggarty admitted involvement in the killings as part of the deal to give evidence against criminals charged. Most people named in his police interviews will not face prosecution amid state concerns about a lack of supporting evidence.

The judge said Haggarty’s evidence was due not to a Road to Damascus conversion but to self-interest – although he added that Haggarty provided substantial help that provided a check against the belief that paramilitaries are “untouchable” and major criminals may otherwise have escaped justice. “As a result of that assistance the defendant has placed himself at considerable personal risk which will have a significant impact for the rest of his life,” he said.

Haggarty, who is in protective custody, has also admitted five attempted murders, including against police officers; 23 counts of conspiracy to murder; directing terrorism; and membership of a proscribed organisation.

The judge said the defendant’s criminality had had a devastating effect on his many victims and their families. – PA