Colm Smyth, who represented senior gardaÍ, says error ‘not a mistake of counsel’ 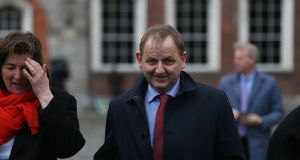 A serious but incorrect allegation against Sgt Maurice McCabe levelled during private hearings in the O’Higgins Commission by the legal team representing Garda headquarters, did not arise from a mistake made by the lawyers, the Charleton Tribunal has been told.

Public controversy over the incorrect allegation at the commission hearings caused an enormous political row in 2016 when it was the subject of media reports. It also led to calls for the resignation of the then Garda commissioner Noirin O’Sulivan.

The controversy suggested there was a difference between the public and private views held by Ms O’Sullivan about Sgt McCabe.

It also contributed to the establishment of the Charleton Tribunal.

The barrister who led the legal team acting for Garda HQ at the O’Higgins Commission hearings, Colm Smyth SC, said the submission drafted by the team and which contained the mistake, was “not a mistake of counsel”.

Exactly how the lawyers came to record this mistake has not been disclosed at the Charleton Tribunal.

The draft was submitted on behalf of Ms O’Sullivan and other senior officers, including officers against whom Sgt McCabe had made serious allegations which were later ruled to be unfounded.

Prior to the document being submitted by the legal team, on May 18th, 2015, the lawyers had held consultations with a number of these officers.

The officers were asked to verify its accuracy before the document was submitted. The incorrect allegation was later put to Sgt McCabe, who said it was “absolutely false”.

The tribunal is investigating whether unjustified grounds were used by Ms O’Sullivan, in an effort to discredit Sgt McCabe.

The O’Higgins Commission was conducting sittings in private to examine complaints about policing made by Sgt McCabe but also serious allegations he had made against senior officers.

Ms O’Sullivan’s legal team was also representing some of these officers.

The tribunal has heard that while the legal team had consulted some of these officers, it had not met with Ms O’Sullivan by the time she gave approval to them to challenge the credibility and motivation of Sgt McCabe.

When a row over the challenging of Sgt McCabe’s motivation erupted at the Commission on May 15th, 2015, the team was asked to produce a document laying out the grounds for justifying the challenge.

When this document was produced on May 18th, 2015, it contained a serious error which suggested Sgt McCabe had made a complaint about then Superintendent Michael Clancy, in an effort to force him to release a document from the Director of Public Prosecutions (DPP) which Sgt McCabe wanted released.

This has been characterised at the tribunal as an effort at “blackmail” and as indicating bad faith on the part of Sgt McCabe.

The error was resolved at the commission hearings on June 24th, 2015, during the evidence of Supt Noel Cunningham, one of the officers against whom Sgt McCabe had made unfounded allegations.

Sgt McCabe had secretly taped a meeting held in 2008 in Mullingar with Supt Cunningham at which the matter involving Supt Clancy was discussed.

A transcript of the taped meeting produced by the sergeant at the commission showed that Sgt McCabe had referred to making a submission to Supt Clancy in relation to the DPP matter, rather than a complaint against Supt Clancy.

Supt Cunningham told the commission this accorded with his memory and with the notes he took at the time and which were with the commission. This resolved the error which had been introduced by the May 18th, 2015 document.

Supt Cunningham was among the officers who were being represented by Mr Smyth at the O’Higgins Commission hearings, as was Supt Clancy.

Mr Smyth, responding to questions on Friday from Michael McDowell SC, who represented Sgt McCabe at the commission, said it was not the case that his clients had shown “hostility” towards Sgt McCabe during the commission hearings.

“I do not agree with you,” he said, when shown transcripts of evidence given by Supt Cunningham. “It is a man trying to defend himself against an allegation made by your client.”

Mr Smyth said he never saw any expressions of ill-will or spite or hostility from the officers. “Quite the contrary.” He said he would have been on the look-out for it, as it could affect the consultations he was conducting.

Mr Smyth at one stage objected to the “military language” being used by Mr McDowell, who had referred to “attacking” his client. “I didn’t attack the man. We probed him.”

Yet the tribunal had the transcript. “This is getting really weird,” he said.

The tribunal has heard that in 2007 the DPP ruled that no charges should be brought against Sgt McCabe arising from a historical child sex abuse allegation made in 2006 by a colleague’s daughter, who was by then no longer a minor.

Sgt McCabe wanted the full view of the DPP released, even though this was not policy. His request was refused.

The DPP had expressed the view that even if the allegations, which were contested, were true, they would not constitute a crime. Sgt McCabe wanted a copy of this finding.