Cocaine and cannabis worth €240,000 concealed in soft toy

Man arrested as 11.5kg of herbal cannabis and €10,000 of cocaine seized in west Dublin 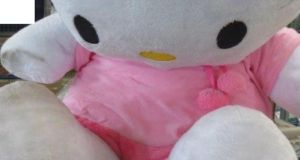 Revenue officers working with gardaí discovered the drugs concealed inside a large soft toy at a house in Dublin 15 on Wednesday morning. Photograph: Garda Press Office

Gardaí have arrested a man in connection with the seizure of cocaine and cannabis worth approximately €240,000 in west Dublin.

Revenue officers working with gardaí discovered the drugs concealed within a large soft toy at a house in Dublin 15 on Wednesday morning.

Gardaí said about 11.5kg of herbal cannabis with an estimated street value of €230,000 had been concealed inside the toy.

Investigators also uncovered €10,000 worth of cocaine and a quantity of cash.

A 55-year-old man was arrested at the scene and is being detained at Blanchardstown Garda station.