Youth stabbed on Liffey Street at around 2.50am on Sunday morning 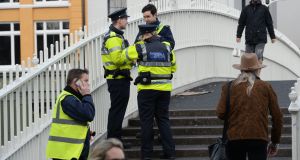 Gardaí on the Ha’penny bridge in the aftermath of a stabbing which took place in the early hours of Sunday morning. File photograph: Alan Betson/The Irish Times

A 19-year-old male is in a serious condition in hospital after he was stabbed in Dublin city centre, in the early hours of Sunday morning.

The teenager was stabbed following a row on Liffey Street in the city centre, which took place at around 2.50am on Sunday morning.

The young man was taken to the Mater hospital where he is receiving treatment for his wounds.

It is understood the youth was out socialising on Saturday night before the attack took place.

A Garda investigation into the assault is ongoing.