Suspension imposed by Garda Commissioner on Fintan Fanning has been lifted 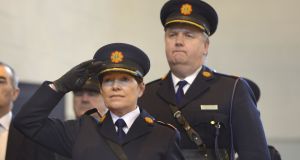 The Garda Ombudsman investigation into Assistant Garda Commissioner Fintan Fanning has been dropped.

Mr Fanning was suspended from duty in January pending an investigation by the Garda Síochána Ombudsman Commission (Gsoc).

Mr Fanning subsequently initiated a High Court challenge aimed at overturning his suspension. He said the suspension was unlawful and unfair and a “flagrant breach of fair procedures” and Garda rules.

Mr Fanning’s solicitor confirmed on Monday night that he had received a letter from Gsoc informing him that Mr Fanning was “no longer the subject of a criminal investigation”. His solicitor also confirmed that the Garda Commissioner’s suspension had been lifted.

Mr Fanning is due to retire in August after almost 39 years in the force, has held several high-profile posts, including chief superintendent of the Dublin South Central Division and regional commander for the Northern and Eastern Regions.

He said in a sworn statement in December 2018 that Gsoc had received a protected disclosure made by a rank and file garda and he was asked to provide certain information within 30 days. He provided that by December 20th and on the same day Gsoc served a notice stating it had received a complaint under the Protected Disclosures Act and had commenced a public interest investigation.

The notice informed Mr Fanning that the complainant alleged that on a date in November 2017, he was contacted directly by another Garda officer and told he was no longer on a specialist firearms course following an intervention by Mr Fanning. The second allegation concerned an incident in December 2017 when the garda claimed he was the victim of an assault.

Larger retail stores to reopen on Monday ahead of schedule 16:21
Covid-19 having ‘profound’ emotional impact on older people in Northern Ireland 15:49
Breach in EU ammonia limits needs ‘urgent’ attention, says EPA 15:34
Church of England distances itself from Irish language ruling on gravestone 15:24
Sunniest spring on record in Dublin with rainfall 70% below average 14:26