Review of Clodagh Hawe murder case to go ahead 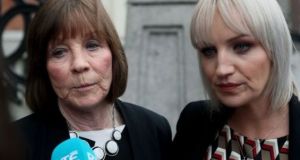 A case review into the murder of Clodagh Hawe and her three sons is to be established by An Garda Síochána.

Speaking to reporters outside Garda Headquarters in Dublin on Thursday evening, Jacqueline Connolly who is a sister of the late Clodagh Hawe said they had a “very constructive” two and a half hour meeting with the commissioner.

“He has agreed to conduct a Serious Case Review headed up by the assistant Garda Commissioner Barry O’Brien,” Ms Connolly said.

“We look forward to being appraised of that process in two weeks time.”

She said they had been “inundated with messages” and were grateful for the support they have received from everyone around the country.

“From the bottom of our hearts we are thankful for that because we could have not gone ahead with this without the support of everyone around us,” said Ms Connolly.

They also thanked the media “for the respectful coverage around Clodagh, Liam, Niall and Ryan”.

When asked if the family was satisfied with Thursday’s meeting, she said: “Everything seems to be going in a positive direction for now.”

Asked if the possibility of the family gaining access to Garda files was brought up in the meeting, she said: “We’re not willing to comment on that at present.”

In an emotional and poignant interview last month Ms Hawe’s mother Mary Coll and her sister Jacqueline called for a full inquiry into the four murders in Ballyjamesduff in August 2016. They also called for all information gathered in the course of the garda investigation into their deaths to be shared as soon as practicable with the next of kin.

Following the meeting, a Garda spokesman said the meeting was conducted in a dignified manner.

“It is welcome that the family found it productive and it helped provided clarity for them on some matters,” he said.

“Commissioner Harris provided the family with information on the criminal investigation undertaken while also respecting the data protection rights and confidentially of those individuals who had given statements to An Garda Síochána in the course of the investigation.”

He said the review team will take a number of weeks to establish.

“Commissioner Harris said the family will be kept informed as the review progresses.”

Earlier this week, the Department of Education said arrangements were being made to facilitate a request by the family for more information that could be relevant to the case.

Ms Coll and Ms Connolly had asked Minister for Justice Charlie Flanagan to help them get access to information on her murder through the Department of Education, Tusla and the coroner.