Pipe bomb found in Drogheda estate ‘could have killed many’

Device discovered attached to gas meter outside house in Moneymore 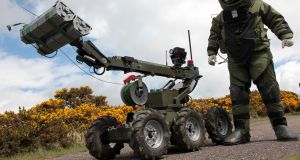 An Army bomb disposal team made safe a pipe-bomb in Drogheda.

An explosive device found in an estate in Drogheda could have killed many people had it not being discovered, security sources say.

The device consisted of a pipe-bomb attached to a three litre canister of petrol which itself had been attached to the gas meter of a house in the Moneymore Estate. A large portion of the estate had to be evacuated on Tuesday night as the bomb was defused.

It is believed the device was left there as part of an ongoing drugs feud in the town, much of which has centred on the estate.

Residents found the device, which initially appeared to be petrol canister with wires coming from it, just after 8pm on Tuesday and altered gardaí.

After a visual inspection, the responding officers decided it looked like a viable explosive device and the Army’s Explosive Ordnance Disposal (EOD) team were alerted. They also evacuated about 20 nearby houses. The EOD team arrived just after midnight and set up a cordon.

It decided against a controlled explosion due to the built up nature of the location. Instead the device was made defused and removed for examination, with the team departing at 1.10am.

Following a technical examination, the device was determined to be a pipe-bomb filled with gunpowder attached to a large petrol canister.

It is understood if it had detonated, the device would have likely ignited the gas supply, and set the house alight, along with the neighbouring houses.

It was much bigger than the pipe-bombs previously used in the Drogheda feud. “This wasn’t about intimidation, someone was seeking to do damage,” a security source said.

“It was crude but effective,” another security source said. “These people are thinking how to maximise the effects of their IEDs [Improvised Explosive Devices],”

A Garda spokesman said investigations into the incident are ongoing.

A technical examination of the scene is due to be completed today, a Defence Forces spokesman said.

“Should members of the public encounter suspicious items, or hazardous substances, they are advised to maintain a safe distance and inform An Garda Síochána, ” he added.