Almost a third of Garda firearm discharges found to be accidental 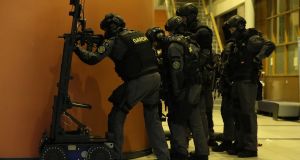 Accidental discharges account for almost a third of all Garda firearms use in the past five years.

Since 2016 armed gardaí have fired their weapons on 16 occasions, according to figures released by the Garda Ombudsman (Gsoc) under Freedom of Information legislation and publicly available information.  The Garda is obliged to report all non-training use of lethal firearms to Gsoc, including accidental discharges and incidents where no one was hurt.

Five of these incidents related to the accidental discharge of a garda’s firearm, including two incidents where the gardaí themselves were injured and one where a suspect suffered life changing injuries after being accidentally shot in the face.

In one incident last June, a detective on guard duty outside the Israeli embassy accidentally shot himself in the leg. Last year in Limerick a garda attached to the regional Armed Support Unit (ASU) required surgery after his handgun discharged accidentally in his patrol car. In another accident in 2016 a garda on duty at Shannon airport fired their personal weapon accidentally but no one was injured.

In 2016, Tomas Mikalajunas, who had been under Garda surveillance due to his participation in a string of burglaries in Limerick, was accidentally shot in the face by an ASU member. Mikalajunas survived with life-changing injuries and later received a suspended sentence.

Despite a significant increase in the number of gardaí carrying firearms in recent years, incidents involving the use of firearms have remained steady.

The Irish Times · Conor Gallagher: the origins of our unarmed police force

Of the 16 incidents, two resulted in the deaths of a person, according to Gsoc figures. One of these was Mark Hennessy who was shot dead by a detective after kidnapping and murdering Jastine Valdez in Wicklow 2018. The garda was later cleared of any wrongdoing.

The other was Det Supt Colm Fox, the lead investigator in the Regency murder case, who took his own life in Ballymun Garda station in February 2018.

Three incidents resulted in the injury of suspects after gardaí intentionally fired their weapons.

By far the most garda shootings were in 2017 when seven incidents were reported to Gsoc. In one incident, a detective shot and injured a man in Portobello, Dublin, who he suspected of having committed a burglary.

In another incident in Ballymun a member of the elite Emergency Response Unit (ERU) shot and injured an 18-year-old-during a raid on a house. An ERU member was also shot and injured by one of the occupants as gardaí entered the house.

So far this year, Garda members have been involved in two incidents, both in Cork, where garda weapons were intentionally fired.

In Mallow in May, a man was shot and injured by gardaí after allegedly driving his car at officers. In July, ASU members fired on a man who had allegedly fired on gardaí with a pellet gun, injuring one officer. The man, who is currently before the courts, was arrested without injury after being subdued with a stun gun.

Many armed gardaí go their entire careers without firing or even drawing their weapon, said Sheelagh Brady, founder of security analysts SAR Consultancy and a former Garda sergeant.

“The training really teaches you that you only draw your firearm where your life or that of others is threatened. And I think members of the Garda really take that seriously,” she added.

“We don’t hear of a lot of reports where firearms are used as a deterrent as we might hear about in other countries.”