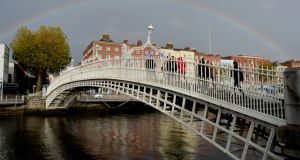 The racist graffiti was scrawled on the pavement of the Ha’penny Bridge, Dublin. File photograph: Alan Betson /The Irish Times

Racist graffiti which appeared on the Ha’penny Bridge and outside a Temple Bar vintage clothing store overnight on Wednesday has been removed following complaints to the council.

The writing, which was spotted on Thursday morning, was scrawled on the pavement of the famous Dublin bridge and across the shop front of Tola Vintage on Fownes Street Upper in Temple Bar.

The owner of the shop posted images of the graffiti on social media on Thursday, noting that the writing was “all over Temple Bar this morning”.

“I refuse to open the shops today,” wrote the Tola Vintage Instagram account. “Not good enough we need to do better.”

The graffiti was later removed from the bridge and the shop, Dublin City Council confirmed.

A Garda spokesman said gardaí were investigating a “criminal damage incident” that occurred at two separate locations in the Dublin 2 area in the early hours of September 17th.

Investigations into the vandalism, which is being treated as “a possible racially motivated incident”, are ongoing, said the spokesman.

“An Garda Síochána takes hate crime seriously, and each and every hate crime reported to us is professionally investigated and victims supported during the criminal justice process,” he added.

In a post on Twitter, the Irish Network Against Racism (INAR) called on any person who spots racist graffiti to report it to their local authority’s customer or environmental services or their local social housing association. INAR also recommended that people join together to re-paint or clean graffiti and to call on local media and leaders to “publicly condemn racism”.

Graffiti and offensive material can also reported to a local Garda station, said the INAR.