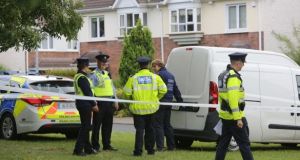 Three men have been remanded in custody after they were charged with attempted murder in connection with a shooting in Dublin.

They were arrested on Tuesday night in an operation by gardai investigating a non-fatal gun attack last year on 42-year-old Wayne Whelan, from Lucan, Co Dublin.

They appeared before Judge Alan Mitchell at   Blanchardstown District Court on Wednesday.

They are accused of attempted murder of Mr Whelan at Griffeen Glen Park, in Lucan, on September 4th, 2019, and committing arson of a Ford Focus which was allegedly set on fire at the Old Bog Road, Kilcock, Co Kildare on the same date.

Detective Sergeant Ronan Dunne told the court that Mr Henderson was arrested at his home address at 11.23pm on Tuesday.

“In reply to both charges, he replied, ‘no comment’,” Det Sgt Dunne told the court.

Det Sgt Dunne said Mr Crawford made no reply when he was charged at Lucan Garda station at 1.43am.

Detective Sergeant John Cosgrove told the court Mr McClean was arrested on Tuesday night at his home address. After he was charged and cautioned, he replied, “no comment”.

Judge Mitchell remanded the men in custody to appear via video-link at Cloverhill District Court on October 6th.

Man caught importing €19,000 of cannabis for use in ‘pain relief’ spared jail

Duane Farry, from Tyrone, accused of assaulting detective and failing to give breath sample