‘As long as we are able to walk, we’ll go after them,’ pledges brother of killed teenager 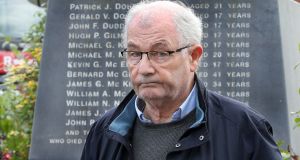 Mickey McKinney, whose brother William was killed on Bloody Sunday, in the Bogside on Tuesday. Photograph: Margaret McLaughlin

Relatives of those killed on Bloody Sunday have vowed to challenge in court the decision by the North’s Public Prosecution Service not to bring charges against 15 soldiers for their actions in Derry on January 30th, 1972.

On Tuesday, the service upheld its 2019 decision that only one former soldier – known as Soldier F – would be prosecuted in connection with Bloody Sunday.

It also upheld its decision not to bring additional charges against Soldier F, who is being prosecuted for two counts of murder and five of attempted murder. The service confirmed on Tuesday that this case would continue.

Ciaran Shiels of Madden and Finucane Solicitors, who represents the families of 10 of those killed and 10 of the wounded, said the ruling was “deeply disappointing” but the families were “not surprised” and were “left with no alternative now but to consider judicial review proceedings in the High Court”.

To apply for a judicial review, he said, “one must first exhaust all alternative means of potential remedy, so it was therefore a necessary hurdle that the families have had to take”.

“We expected this, but I think in the High Court it’ll be another matter,” he said.

John Kelly, whose 17-year-old brother, Michael, was among the victims, said the families were “not giving up yet”.

“It’s been a long road, coming up to nearly 50 years,” he said. “We’re all getting old, a lot of people are dying, but as long as we are able to walk, we’ll go after them.

“We’ll not stop until we see justice for our loved ones, and the next stage is the judicial review in the High Court. I look forward to that.”

Senior assistant director of the Public Prosecution Service, Marianne O’Kane – who carried out the internal review – said new decisions were taken in regard to each review request.

The “available evidence is insufficient to provide a reasonable prospect of conviction of any of the 15 soldiers who were the subjects of the reviews”, she concluded.

“Accordingly, the decisions not to prosecute these 15 individuals all stand.”