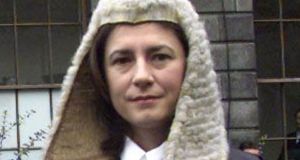 Senior Counsel Nuala Butler has been nominated to serve as a judge of the High Court.

On Tuesday, the Government said it had taken the decision in order to fill the vacancy left following the appointment of Ms Justice Teresa Pilkington to the Court of Appeal earlier this month.

Educated at University College Dublin and the Honourable Society of King’s Inns, Ms Butler joined the Bar in 1986 and the Inner Bar in 2003.

She has served as a member of the Employment Appeals Tribunal; as chair of the Mining Board; and chair of the Incorporated Council for Law reporting in Ireland.

“At its meeting today, the Government agreed to nominate Nuala Butler SC for appointment as an Ordinary Judge to the High Court by the President of Ireland,” it said in a statement.

“The Government has taken the necessary steps to formally advise President Higgins of the nomination in accordance with constitutional practice.”

Under the Constitution, the president makes judicial appointments on the advice of government.