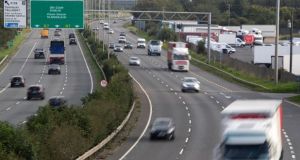 The man who died on Monday after a car driving the wrong way down the N7 hit his vehicle has been named locally as Anatolie Butucel.

The 45-year-old, who was originally from Moldova, died in the early hours of Monday morning after the Yaris he was driving was hit by a Volkswagen Passat which was driving the wrong way on the dual carriageway and suffered what a source described as “catastrophic” injuries. A second man in his 30s who was travelling with Mr Butucel in the Yaris is being treated for life-threatening injuries following the collision.

The Volkswagen Passat had been spotted shortly after midnight driving erratically in the Tallaght area.

Suspecting the car may have been stolen, gardaí attempted to speak to the driver but the Passat drove off the wrong way down an exit ramp onto the N7 at the Kingswood intersection.

Gardaí decided not to pursue the car onto the dual carriageway for safety reasons. A short time later, at 12.20am, the Passat collided with a Toyota Yaris on the N7.

The occupants of the Passat, a man in his 20s and another in his 40s, were also taken for treatment. Gardaí said on Tuesday that no arrests have been made yet.

The Garda Síochána Ombudsman Commission (Gsoc) was notified of the incident and is conducting an examination into the collision. It is obliged to examine all incidents where a death occurs following an interaction with gardaí.

Mr Butucel was one of four men, all aged in their 40s, who died in four separate road incidents across the State between Saturday and Monday.

A total of 110 people have died on Irish roads so far this year, up from the 99 deaths reported during the same period last year, according to the latest Garda data.

Of those who died, 23 were pedestrians, 43 drivers, 23 passengers, 15 motorcyclists and six were cyclists.

Also on Monday, a van driver in his 40s died on the N24 between Kilsheelan and Carrick-on-Suir in Co Tipperary after his vehicle was in collision with a lorry.

The lorry driver, a man in his 60s, was taken to Waterford University hospital with serious injuries.

Another man in his 40s died on Sunday morning in a two car collision on the N15 near Rathcormack in Co Sligo.

The female driver of the second car, who is in her 30s, was taken to University Hospital Galway by air ambulance where her condition is described as serious. The two other passengers travelling in her car were also taken to hospital with serious injuries.

On Saturday, cyclist David Steele died following a collision involving a car on the R108 road at St Margaret’s near Dublin airport.

Mr Steele’s wife Karen paid tribute on social media to the “love of my life, my husband and my soulmate”, describing the Facebook update as “the hardest post I’ve ever had to write”.

“My world will never be the same... absolutely heartbroken. My ironman forever. The big strong man forever.”