Pedestrian (70) dies after being hit by lorry 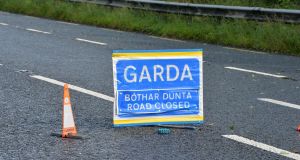 The lorry driver was not injured in the collision in Co Offaly. File photograph: Alan Betson/The Irish Times

A 70-year-old pedestrian was killed after being hit by an articulated lorry on Tuesday in Co Offaly.

The man was rushed to Tullamore hospital following the incident. He received treatment but died from his injuries.

The incident occurred around 7.30am, near the outskirts of Ferbane, in Co Offaly. The articulated lorry was travelling down the N62 road between Athlone and Ferbane when the collision occurred, according to gardaí.

The stretch of road was closed off for most of Tuesday while a Garda forensic examination took place. The road was reopened later in the day.

Gardaí are appealing for any witnesses who may have been travelling along the road between 7am and 7.20am to contact Birr Garda station, where they are investigating the incident.