‘If a bystander had yelled ‘stop’, my son could be alive today’ 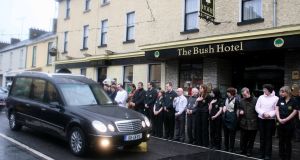 Rosie Dolan says it still breaks her heart to think of her son Andrew pleading with his attackers: “Please don’t hit me.”

“Imagine him saying ‘please’. That always breaks my heart, to think of his fear at that moment. As a mother it’s hard watching that,” says the Leitrim woman. She has seen CCTV footage of the attack many times, her son innocently scrolling on his mobile phone as he leaves a Mullingar chip shop, passing the people who within minutes would assault him with such tragic consequences. Andrew (20) died on New Year’s Day 2012, 10 days after the unprovoked assault by two young men and a young woman.

Almost six years later, his mother is backing campaigns by the gardaí and young people in Andrew’s native county of Leitrim, designed to make the streets safer for everyone.

Garda figures show that, following a slight reduction in 2016, assaults causing harm, as well as minor assaults, have risen 11 per cent this year from 9,500 in the year to October 2016, to 10,600 incidents in the following 12-month period. More than half of all assaults occur between 8pm and 5am and, according to Sgt Kelvin Courtney, promoter of the Garda’s campaign Use Your Brain, Not Your Fists, the offenders and the injured parties are most likely to be males aged 18-39.

Rosie and Joe Dolan, who own the Bush Hotel in Carrick-on-Shannon, know that Andrew’s assailants did not set out to kill anyone that night. Rosie is supporting the Use Your Brain campaign and also an initiative by Comhairle na nÓg in Leitrim that is making a short video highlighting the dangers of aggressive behaviour, which they plan to show in postprimary schools nationwide next year.

In an address to 100 young members of the youth organisation recently, Rosie urged them to learn from Andrew’s death. Referring to the trial judge’s remark that the three assailants were “out of control” with drink that night, she said: “If a bystander had yelled ‘stop’, if friends had got a taxi home for someone out of control with drink, my son could be alive today.”

Sometimes it just takes a word from a pal to calm a potentially dangerous situation, she says. “If someone had said ‘Stop, you could kill him ... ’ ” she says. She recalls the late-night phone call to tell her her son was in hospital on December 23rd, 2011. She and her husband put on their work clothes to be prepared for the following day’s Christmas rush, little dreaming of the nightmare facing them.

Rosie is appealing to parents to play their part in keeping their children away from trouble. “They need to tell them to behave, to have respect for other people,” she said.

Sgt Courtney says one of the most telling things about the statistics is the low level of repeat offending, which shows that assaults that can be fatal or life-threatening are often totally out of character. “It is often random, fuelled by alcohol,” he says. He also suspects that under-reporting of late-night assaults means the real figures are higher. “That doesn’t make it easy for us.”

The Garda campaign is targeting 18-39-year-olds, urging them to remember that as well as wrecking a victim’s life, perpetrators too have a lot to lose – including their jobs, ability to travel, freedom and peace of mind – and risk putting their own families through immense pain.

Fiona Taylor, the co-ordinator of Comhairle na nÓg in Leitrim, says their educational video , which will be launched in the new year, is aimed at younger people, who are also being exposed to aggressive behaviour. It happens at teenage discos, schools and on the sports field. Research done by the group shows that schools are the biggest problem area. “That really surprised us,” she says.

Taylor hopes the educational video, which is being funded by Creative Ireland and the North West Drugs Taskforce and will feature Rosie, will be shown in secondary schools in every county.

“We want young people to realise that all it takes is one silly minute to change someone’s life,” says Taylor. “We have heard the stories from young people about teenage discos where there are people who keep elbowing and shouldering until they get a reaction and then there is a fight.”

Sgt Courtney says that people have to learn to “take a step back” or to urge a friend who is getting heated to do the same thing. He says having a plan is important, whether that’s parents knowing their teen can get a taxi home or young people avoiding situations where they have to walk alone in dark places.

“I just feel sorry for Andrew, for all he missed,” says Rosie, who describes her son as gentle, kind, good-humoured and witty, a student who loved sport, playing guitar and his PlayStation. “He did nothing wrong. He was robbed of his future.”