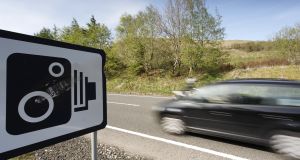 Speeding attracts the most penalty points of any road traffic offence, with 549,574 points issued in 2016. Photograph: Getty Images

Speeding motorists will face higher penalty points depending on how far over the speed limit they drive, Minister for Transport Shane Ross has said.

In an interview with The Irish Times, Mr Ross confirmed he is to introduce a new graduated penalty points scheme targeting speeding drivers, claiming the current regime is too lenient.

Motorists travelling far in excess of the speed limit will now face “four, six, eight or more points, depending on how fast they are going, and I wouldn’t rule out disqualification on a first offence, for really extreme cases”.

Mr Ross said the method of graduation and whether the points imposed would increase with every 10kms, or every 20kms over the limit a driver was travelling, was being worked on by his officials but he stressed there would be “multiple steps of graduation”.

“The idea of speeding being the next point of attack in terms of road safety is mine. It is in response to figures in relation to speeding that we have got from the Road Safety Authority and other agencies,” Mr Ross said.

“Speeding is not equally as bad as drink-driving, but it is a very high-risk behaviour and it needs to be addressed.”

The Minister said he wanted the new penalties to be put in place this year, insisting the measure was needed if Ireland was to reach the 2020 target of reducing road deaths to under 124 a year.

According to provisional figures from the Garda released on Monday, the 158 lives were lost in 143 separate crashes. This compares to 186 lives lost in 174 fatal crashes in 2016.

The previous record low was set in 2015 when 162 people were killed.

Speeding attracts the most penalty points of any road traffic offence, with 549,574 points issued in 2016, followed by mobile phone use.

In relation to drivers using their phone, the Minister said he was considering a recommendation from the Road Safety Authority to increase the penalty points for this offence from the current level of three.

Mr Ross also outlined plans to introduce a strict regulatory system for rickshaw drivers up to the level of taxis, describing the present situation as “the wild west” and “dangerous”.

Currently, rickshaws are treated as bicycles under Irish law, and rickshaw drivers are not required to have public liability insurance.

The Department of Transport is examining regulating the vehicles under the Taxi Regulation Act 2013, bringing in certain standards for drivers including the requirement to be licensed, insured, and to undergo background security checks.

Mr Ross said he was minded to ban rickshaws outright but believed they would continue to operate illegally.

Figures released following an Irish Times investigation showed 85 drivers were arrested for drug-dealing in the Garda district covered by Pearse Street station, the main trading area for rickshaws, in 2017.