Fee of €150 ‘a significant challenge’ for people on low incomes and migrants, says FLAC 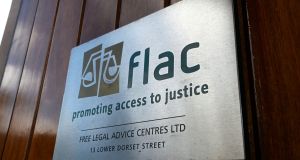 The decision to remove the €150 fee for people seeking civil legal aid in domestic violence cases in the District Court has been welcomed.

The fee often created a significant challenge for people on social welfare and for migrants wanting to take domestic violence cases, according to the chief executive of Free Legal Advice Centres, Eilis Barry.

It was also often the case that people experiencing domestic violence were also experiencing financial abuse and were not in a position to access their notional income, she said.

The new regime comes into effect from January 1st which is timely, Ms Barry said, given that frontline organisations dealing with people experiencing domestic violence regularly report an increase in the numbers seeking assistance once the Christmas period is over.

Minister for Justice and Equality Charlie Flanagan announced the move on Thursday.

While the Legal Aid Board currently waives the fee in more than 20 per cent of cases, the change removes a barrier to access to justice, he said.

“The decision to approve this change acknowledges the representations made by interested [groups] in this regard and the fact that the UN Convention on the Elimination of all forms of Discrimination against Women has recommended the abolition of the legal aid contribution in such cases,” he said.

The chairman of the Legal Aid Board, Philip O’Leary, said it had been concerned that where issues of domestic violence arise, there should be no barriers to seeking a domestic violence order from a District Court. To the extent that a financial contribution for legal aid acts as a barrier, both he and the board very much welcomed the decision, he said.

Ms Barry said it was to be hoped that the Minister, like the Chief Justice, Frank Clarke, was making access to justice a centrepiece of his tenure.