Robbery suspect arrested after being tackled by pub customers 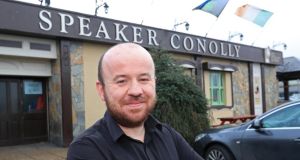 A man arrested following an armed robbery at a pub in Tallaght during which he was tackled by three customers and held until gardaí arrived will appear in court on Wednesday.

The man entered the Speaker Connolly Pub on the Firhouse Road just before midnight on Monday armed with a suspected firearm and demanded money.

He was confronted and tackled by a group of customers who held him in the kitchen.

The assistant manager Jason Doyle described how customers in the pub intervened to stop the robber.

“Next minute I was in the office area and the door of the kitchen burst open and I just heard a lot of roaring and shouting,” he told RTÉ News.

“The three lads had come in and jumped the counter. They burst into the kitchen area, jumped on him and dragged him down to the ground and wrestled the gun after him.

“We had an off-duty detective who was drinking here last night. The detective held him down until the guards arrived. The three lads just went back out and finished their drinking.”

The owner of the pub, James Murphy, said the men who intervened only drank in the pub occasionally. They were not regulars.

“I would like to thank them. They were very brave for what they done. They took a big risk because these people, when they are robbing a place, just lose their heads.”

A large number of gardaí arrived on the scene shortly afterwards, supported by the Garda helicopter.

The suspected firearm was found at the scene and has been taken away for technical examination.

The suspect, a Dublin man in his 30s, was held for questioning at Tallaght Garda Station under section 30 of Offences against the State Act 1939.

Gardaí said on Tuesday night he would appear in court at 10.30am on Wednesday in connection with the incident.