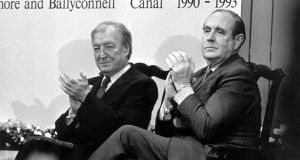 British officials raised concern about alleged collusion between the Provisional IRA and members of both the Garda Síochána and the Irish Army in the early 1990s, newly-declassified files reveal.

A 1991 Northern Ireland Office (NIO) memo recorded disquiet in the British government at the Defence Forces’ failure to court-martial an Irish soldier who was found to have passed on information to the IRA.

The Irish government in turn raised concern about evidence of collusion between British security forces and loyalists paramilitaries, including allegations of an “inner circle” operating within the RUC which was involved in murders in Northern Ireland.

The details are disclosed in previously confidential files which have been released in Belfast by the Public Record Office.

The UK is moving towards releasing records after 20 years rather than 30, which is the case in the Republic, leading to a large volume of files from 1991 and 1992 being made public in Belfast this year.

A memo dated November 15th, 1991, refers to a discussion at an Intergovernmental Conference on the arrest of a garda who was charged under the Official Secrets Act with passing information on Garda operations to the Provisional IRA. The case was sub judice while a second garda, who had been suspended during an investigation, had been reinstated in the force.

The memo further alleged that “an Irish Army soldier had been discharged from the Army for passing information to PIRA”.

The soldier had over a six year period “passed details of call signs and radio frequencies to a PIRA contact. He also passed details of the Garda arrangements at Defence Force Headquarters”.

However, the official noted, he had no access to ciphers and no knowledge of Border operations although he would have known of the deployment of the force used to protect VIP visitors.

The report continued: “[The soldier] was employed as a barman at a Provisional IRA-linked pub which is allegedly used for a money-laundering operation and was paid several times more than the going rate.

“When approached he made a full disclosure without caution and it was decided not to court-martial him.”

He was discharged by the Department of Defence, and the chief of staff of the Irish Army had ordered a board of officers to examine the case and to report on possible changes of procedure to prevent a recurrence.

The unnamed NIO official who wrote the memo urged the secretary of state Peter Brooke to tell the Irish that they were disturbed to hear of the case and to ask why the rogue soldier was not court martialled.

Other files reveal Irish concern at alleged collusion between the British security forces and loyalist paramilitaries.

A meeting of the Anglo-Irish Intergovernmental Conference in Dublin on July 16th 1991 saw RUC chief constable Sir John Hermon explain the background to the dumping of IRA documents at a rubbish dump in Dungiven, Co Derry which he described as “an unfortunate mistake”.

On the loss of photo montages of a number of IRA suspects, British ministers explained that during a patrol on July 11th/12th a set of montages of all the leading IRA “players” in South Armagh had been “accidentally dropped in difficult country”. The montages were unlikely to fall into loyalist hands but the RUC were assessing the threat to individuals, the meeting was told.

Concern was later raised by minister for foreign affairs Gerry Collins about allegations that an “inner circle” operated within the RUC which was involved in recent murders in Northern Ireland, including the 1989 murder by loyalists of leading defence solicitor Pat Finucane.

The issue was raised at an Anglo-Irish conference in London on October 17th 1991 attended by Brooke, Hermon and the NIO paymaster general Lord Belstead. Along with Collins representing the Irish government was minister for justice Ray Burke and minister for education Mary O’Rourke.

The meeting began with Irish concerns that the British had not honoured their pledge to ensure the accompaniment of UDR patrols by the RUC.

Mr Collins also raised the recent use of lethal force by the security forces in the North. He referred, in particular, to the recent killing by the RUC of Kevin McGovern, a 20-year-old Catholic student, in Cookstown, Co Tyrone. He had already discussed this “very tragic case” with Brooke privately.

Public confidence was inevitably shaken by such incidents which suggested a “trigger-happy” attitude on the part of some members of the RUC. Lord Belstead acknowledged that it had been a tragic killing.

Responding, the RUC chief constable said McGovern was shot dead when a police patrol challenged three youths to stop. Two challenges were issued before warning shots were fired. Two of the youths stopped but a third ran away and seemed to throw something at the patrol. McGovern was fatally wounded.

Hermon said he had considered suspending the officer but felt there were no grounds to do so and had moved him to a different area.

Discussion then turned to a recent Channel 4 Dispatches programme which alleged that an RUC “inner circle” was colluding in loyalist paramilitary murders. Mr Collins said he had emphasised at previous meetings how allegations of collusion between the security forces and loyalists “raised profound fears in the Nationalist community”.

Hermon said “there were sometimes dishonest policemen” but he was critical of the Dispatches programme, saying that “his initial findings” ruled out the existence of an “inner circle” in the RUC.

As regards the murder of Finucane in February 1979, the chief constable said the solicitor “was a well-known and obvious target for Loyalist paramilitaries”.

He gave the conference his personal assurance that if any officer was suspected of collusion he would be arrested. Collins said “he accepted everything the chief constable had said in the knowledge that he meant every word”.

* Dr Éamon Phoenix is a political historian, journalist and broadcaster. He is a member of the Taoiseach’s Expert Advisory Group on Commemorations.