Two men killed in separate stabbings in Cavan and Limerick 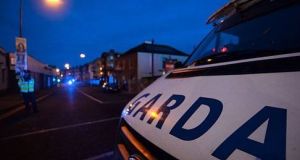 Gardaí said the Cavan stabbing incident occurred at Dublin Street, Ballyjamesduff, at about 11pm on Sunday

Two men were fatally stabbed in Cavan and Limerick at the weekend. Gardaí have charged a man in connection with one of the deaths.

Willie Lynch (35), originally from Ballybrown, Co Limerick, was discovered dead in his home on Main Street, Pallaskenry, Limerick, on Saturday.

In a statement on Monday night, gardaí said they had charged a 29-year-old man “in connection with the murder”.

They said the man would appear before Newcastlewest District Court at 10.30am on Tuesday.

The victim’s home remained sealed off at the weekend as forensic gardaí searched the property for evidence.

Owner of the Pallaskenry Foodstore on Main Street, Iffy Rabbani, described the victim as “a very nice fella”, and said Mr Lynch had often helped him with small jobs. “He was a very helpful guy. I’m very shocked. I opened the shop on Christmas Day and he came in, and that was the last time we spoke.”

Mr Lynch was due to play in a charity pool tournament in Bourke’s Bar in the town on the evening he was found dead. Mr Lynch’s friend Darren Dundon, (29), who was due to play pool with him in the charity event, said he was stunned.

“Willie was a gentleman, that’s all I can say. We had a chat every day. He was the nicest fella you could ever meet. I’m shellshocked.”

“It’s a big shock. I’ll offer any help I can to the family.”

Separately, a man died following a stabbing in Cavan on New Year’s Eve. Gardaí said the incident occurred at Dublin Street, Ballyjamesduff, at about 11pm on Sunday.

A 40-year-old Polish man received serious stab wounds and was taken to Cavan General Hospital. He was pronounced dead shortly after 9.30am on Monday.

A Garda spokesman said a postmortem was scheduled to take place, and the local coroner had been notified. No arrests have been made.

The scene has been preserved for a technical examination, and the Garda Technical Bureau are attending the scene.

Gardaí are hoping to speak to anyone who was driving on Dublin Street, Ballyjamesduff, between 10.30pm and midnight on the December 31st, and who may have had a dash cam in operation.

They are also asking members of the Polish community or any member of the public who may have any information to contact them.

Gardaí appealed for witnesses who may have been in the area at the time of the incident or have information to contact them at Bailieboro Garda station, on the Garda confidential telephone line at 1800 666 111 or at any Garda station.