Prior to the jury’s decision being announced, the Ryan family members clutched hands, white knuckles revealing what they were going through 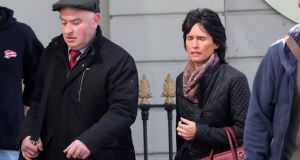 Patrick Quirke and his wife Imelda arriving at the Courts of Criminal Justice where he was convicted of the murder of Bobby Ryan. Photograph: Colin Keegan, Collins Dublin

Tipperary farmer Patrick Quirke (50) stared straight ahead as the jury’s decision that he was guilty of murder was read out in the Central Criminal Court in Dublin shortly after 2.30pm.

His wife, Imelda, who was sitting on a bench facing the judge, kept her head down. Her bench was perpendicular to, and not far from the bench on which her husband sat, but neither tried to make eye contact.

During what has been the longest murder trial in the history of the State, Imelda Quirke has been accompanied to court on occasion by her adult son, but on the day judgment was given she was accompanied by one of her husband’s sisters. Once the verdict was announced, this woman began busily texting on her phone.

The bench in front of Imelda Quirke was occupied by members of the family of Quirke’s victim, quarry driver and part-time DJ Bobby Ryan, who went by the name Mr Moonlight.

In the tense moments prior to the jury’s decision being announced, the family members clutched hands, the array of white knuckles bearing witness to what they were going through.

When the decision was announced it was given in the language of the courtroom rather than that of everyday life, and so for a hanging moment they appeared unsure as to what had just been disclosed. But then the realisation dawned, and the floodgates opened.

There was a brief adjournment, and Quirke was taken away. When the hearing resumed, Imelda Quirke was no longer in the room, and, for the first time since the trial began in January, Quirke was not wearing a tie.

Michelle Ryan took the stand, and on behalf of her family read an emotional and moving statement while the man who had murdered her father sat just feet away, staring as always straight ahead into the middle distance.

“We close our eyes every night and picture daddy with fear in his eyes. We wake up every night with the nightmares.”

The trial heard that Bobby Ryan had been in a relationship with Mary Lowry, whose late husband, Martin, was the brother of Imelda Quirke.

Quirke also rented her farm from her, and it was on the farm, in an underground tank, that Mr Ryan’s body was found in April 2013, almost two years after he had gone missing after having spent the night in Ms Lowry’s home.

Ms Justice Eileen Creedon sentenced Quirke to life in prison, and he was taken away. An hour later, on the steps of the Criminal Courts of Justice, Michelle and Robert Ryan jnr made a brief statement to the media, holding a framed photograph of their late father in their hands as they did so. He bore a striking resemblance to his grieving son.

“We got justice for daddy today,” said Michelle.

She thanked the prosecution legal team, gardaí who had investigated her father’s killing, and the family and friends without whose support “we would be lost”.