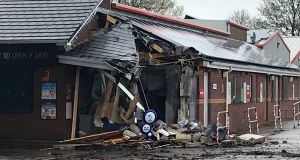 The scene at a fuel station at Tully Road, Nutts Corner, Antrim, where a digger was used to rip an ATM from the wall. Photograph: Rebecca Black/PA Wire

A man has been remanded in custody charged with theft after a cash machine containing £60,000 was ripped from a shop wall with a digger.

Lee Wilson (31) of Benview Drive in Belfast, was one of two men arrested following the theft of the ATM from the service station at Nutts Corner, Co Antrim.

He appeared before a district judge in Ballymena on Wednesday afternoon facing seven charges connected to the incident. Judge Nigel Broderick refused an application for bail after expressing concern that Wilson might commit further offences or interfere with the police investigation.

“Your innocence is not in dispute,” he said.

He said Wilson had engaged in “very serious offending”.

“There have been a number of similar-type offences in this jurisdiction and obviously that’s a matter of concern to the court and the police,” he said.

The court heard that Wilson made full admissions to police in respect of his role in the crime.

Wilson, unshaven and wearing a grey jumper, nodded and said “Yep” when asked if he understood the charges he was facing.

His solicitor, Paddy Hunt, told the court that his client — a married father of two — was a “bit player”.

“He was a very small fish in what might be described as a larger pond,” he said.

The lawyer, who described the raid as “inefficient and unprofessional”, said Wilson was suffering from anxiety and depression and saw the opportunity to make only “several hundred pounds”.

“He entirely accepted his responsibility and did not prevaricate with police,” he added. The theft was the latest in a spate of ATM thefts in Northern Ireland this year - 15 have been stolen so far in 2019.– PA