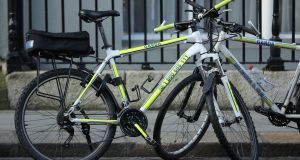 There are currently 177 mountain bikes in An Garda Síochána. Photograph: PA

An Garda Síochána has spent almost €72,000 repairing damage to bicycles used by officers in the last five years.

Freedom of Information requests also found that there are currently 177 mountain bikes in An Garda Síochána.

A further €11,237 has been spent on added decals to the bikes, such as lights.

“804 members of An Garda Síochána have successfully completed the Garda Mountain Bike Course since 2016,” a Garda spokesman said.

“The total on repairs equates to an average [annual] cost of 80 euro per mountain bike over the last five years, and includes the cost of annual servicing to maintain each bicycle in a serviceable condition.”

The force says they “provide high visibility patrols and mobile support to large events that strengthen our overall strategy of keeping people safe”.

Officers on bikes are often seen at protests such as this year’s Raise the Roof housing action and climate protests, and were used for crowd control and force visibility during the Pope’s visit to Dublin.

Each officer must complete a week-long bike course, which costs €153 euro, and subsequently pass a fitness test, which includes balance exercises, at a cost of €44.50, in order to be signed off onto a bicycle, and are selected by their local Divisional/District Officers for training.

The cost of each bike is €899 excluding VAT.

The amount spent on cycling gear for Garda members is certain to increase, as a public tender for 1,200 pieces of equipment, and more specialised mountain bike uniforms has recently closed.

In the recent tender, An Garda Síochána was seeking to spend around €135,000 plus VAT on helmets, which have 400 stickers that say Garda, two different kinds of gloves, shorts, glasses and “Terry towel sweat wipes”.

One request in the tender was for 200 sets of Lycra cycling shorts with “ergofit padding from Italy”, ensuring “a correct muscular compression”, “flat-lock stitched seams for maximum comfort” and “soft elastic with silicon gripper design”. - PA