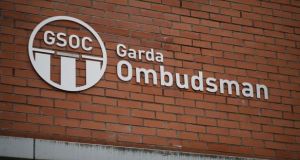 Gsoc officials are increasingly unhappy that they often have to learn about incidents of alleged garda misconduct through the media. Photograph: The Irish Times

The Garda Commissioner has not agreed to proposals that it voluntarily notify the Garda Ombudsman of alleged misconduct by members of the force.

In a letter published in The Sunday Times today Ms Justice Ring said that to date, Mr Harris “has not agreed.”

The High Court judge pointed out that as a result of Gsoc investigations, five convictions have been secured against gardaí this year, including one for the sexual assault of a child.

She also noted Gsoc is obliged to notify the Garda of every investigation it launches into a member of the force but that there is no equivalent obligation on the Garda when it begins investigating a member.

Gsoc officials are increasingly unhappy that they often have to learn about incidents of alleged garda misconduct through the media.

It said this month it only learned of garda investigations into four members or retired members through media reports. These include a senior garda accused of sexual harassment and one accused of involvement in serious immigration fraud.

Last year the Ombudsman opened a public interest investigation into an incident involving a garda armed support unit losing a submachine gun when it fell out of the back of a patrol car. Gsoc said it only learned of the incident through media reports.

“The complicated investigative processes that Gsoc must follow ensures its investigations take an unduly long time to complete. We look forward to more streamlined processes being set out in forthcoming new legislation, as recommended by the Commission on the Future of Policing in Ireland, ” Ms Justice Ring wrote this weekend.

“In advance of that legislation, Gsoc has asked the commissioner to enter a voluntary agreement to notify us of alleged misconduct by gardaí. To date he has not agreed.”