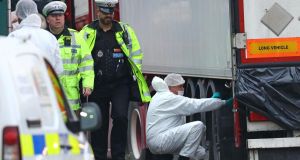 UK police forensics officers at the Waterglade Industrial Park in Grays, Essex, after 39 bodies were found in a truck in October 2019. Photograph: Aaron Chown/PA

The Criminal Assets Bureau (Cab) has frozen 19 bank accounts controlled by two Irish men who have emerged as persons of interest in the investigation into the deaths in October of 39 people who were being smuggled into England.

The frozen bank accounts had more than €200,000 on deposit, which is now no longer available to the suspects. The Irish Times understands all of the accounts were registered in the State.

The Cab has frozen the accounts on the basis the money in them is suspected to have derived from crime. Other assets owned by the same two suspects have also been seized, including several vehicles.

An investigation by the bureau into the two men has been under way since late 2018 because they were suspected of involvement in smuggling alcohol, cigarettes and drugs.

The 39 Vietnamese people were found dead in Grays in Essex on October 23rd last in the back of a container that had just been shipped from Zeebrugge, Belgium, to a port in nearby Purfleet. The two men already under investigation by the Cab emerged as of interest to Essex Police following the discovery.

As a result of the development in the UK, the Cab’s investigation into the two, which was already well advanced, was accelerated and a major search operation targeting their assets was carried out in November.

In a related operation days earlier in Dublin, the Cab seized two trucks suspected of being the proceeds of crime.

The trucks were also linked to the same men who owned the vehicles seized in Co Monaghan and who controlled the now frozen bank accounts.

The movement of money in and out of the accounts was being studied by the Cab in an attempt to establish who the two suspects had financial dealings with.

Any information that may been deemed relevant to the Essex Police inquiry was also expected to be shared.

While the accounts have been frozen by the Cab, the bureau must go before the High Court and prove the money in the accounts is the proceeds of crime before the cash can be permanently seized.

Two men from Northern Ireland have been charged in England in relation to the Essex deaths. The extradition of a Northern Irish man is being sought.

The other two men under investigation by Cab are being sought by Essex Police for interview in relation to the deaths of the 39 Vietnamese nationals.

However, the whereabouts of the two suspects has not been known since Essex Police began its inquiry.