Overseas assets of organised criminals to be targeted 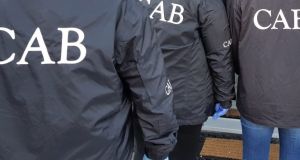 The Criminal Assets Bureau can seize assets in Ireland without a conviction, providing it can prove on the balance of probabilities they resulted from criminal activity. File photograph: An Garda Síochána

The Criminal Assets Bureau (Cab) is to begin targeting the overseas assets of organised criminals as part of a widening of its enforcement activities abroad.

Many major Irish criminals, including the leadership of the Kinahan organised crime group, keep their assets in other jurisdictions, effectively putting them beyond the reach of Cab.

As part of its strategic plan for the next three years, the bureau has undertaken to “widen the scope” of its enforcement activities by “targeting offshore assets via mutual assistance provisions”.

This will involve working with police services or criminal asset agencies in other countries under official agreements to target the wealth of Irish criminals or foreign gangs that operate in Ireland.

However Cab is still likely to face significant hurdles in seizing the foreign wealth and properties of criminals such as the Kinahans.

Cab can seize assets in Ireland without a conviction, providing it can prove on the balance of probabilities they resulted from criminal activity. In most other countries, the state can only seize assets post-conviction.

Cab is also unlikely to be able to target the assets of criminals such as Daniel or Christy Kinahan as they are both no longer tax residents in Ireland.

Under its strategic plan, Cab has also undertaken to expand its targeting of criminals who fraudulently claim social welfare. It will now start pursing social welfare payments through the courts, rather than simply issuing a bill to the person.

It said its goal was to increase the number of overpayments it identifies every year for the next three years and to increase savings in social welfare payments for the State.

Other goals include the initiation of 120 new proceeds of crime applications before 2024 as well as 90 new “search and enforcement operations” and 170 new tax investigations.

The new activity will be funded by €9.1 million in the bureau’s budget for this year.

“Criminals continue to become more adept at concealing the fruits of their criminal conduct. In order to identify and trace such assets, we will utilise all available intelligence sources, remain vigilant to emerging trends and continually evolve our investigative methods,” the Cab said.

While Department of Social Protection officials investigate most suspected social welfare overpayments, the Cab is tasked with investigating cases involving known criminals or people who may pose a threat to department staff.

Last year, the Cab uncovered and demanded repayment of more than €1.5 million in social welfare overpayments.

These included €122,000 in overpayments to a Dublin family who, over a five-year period, had lodged €1.9 million into various accounts they held. The family is appealing the assessment.

The bureau demanded €308,000 from another man who was in receipt of disability benefits for 14 years. An investigation showed during this period he worked as a taxi driver, bought a property in Kildare and lodged €190,000 in his bank account, none of which he declared to the department .

The bureau, which employs 93 staff, shares the offices of the Garda Síochána on Harcourt Square in Dublin. It is seeking its own dedicated premises for relocation in 2022.