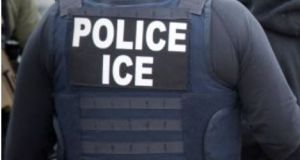 US authorities have deported a convicted IRA bomber who first travelled to the country 20 years ago.

The Immigration and Customs Enforcement (Ice) agency in Boston described Darcy Gearoid McMenamin as an Irish national and member of the Irish Republican Army.

In official documents, the agency said McMenamin has a history of paramilitary-related crime in Ireland, including a conviction for participation in the bombing of an RUC station near Omagh, Co Tyrone in 1993.

A report in the London Independent in early 1994 said the then 18-year-old McMenamin, of Omagh, Co Tyrone, appeared at Belfast magistrates’ court charged with bombing the RUC station in Fintona just 16 minutes after the end of the IRA’s Christmas ceasefire.

According to Ice, he received an eight-year prison sentence.

Last year, the Irish News reported that McMenamin (44) had been released from prison under the terms of the Belfast Agreement. It said the Fintona station had been vacant when bombed but that two passers-by were injured.

“There is no safe haven in the US for foreign nationals convicted of terrorist activities,” Todd M Lyons, a US enforcement and removal operations, said in a statement.

“Those who believe they can hide in the US from their crimes including terrorist activities they committed in other countries are in for a rude awakening. Ice remains committed to removing dangerous foreign nationals form the US, even those who may have managed to evade immigration law for a lengthy period of time.”

The meaning behind Mr Lyons’s reference to “hiding” is unclear given that McMenamin had served time for the offence in question. The US documents do not mention any other incidents, although it does detail his immigration offences.

McMenamin is said to have entered and departed the US through the visa waiver program on numerous occasions between 2000 and 2007, never disclosing his criminal history as is required under immigration law.

According to the Irish News, he had been running a successful business in the United States when he came to the attention of the authorities for motoring issues.

In 2007, the US Customs and Border Protection service granted him “port-authorised parole”, allowing him into the country for a few days for the birth of his child. He never departed the country and was therefore in violation of US law.

“Ice is focused on removing public safety threats, such as convicted criminal aliens and gang members, as well as individuals who have violated our nation’s immigration laws and those convicted of terrorist activities, including those who illegally re-entered the country after being removed and immigration fugitives ordered removed by federal immigration judges,” the agency said.