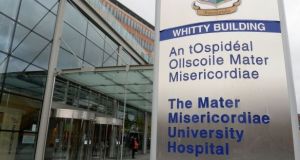 The victim was brought to the Mater Hospital where he is currently being treatedFile photograph: Frank Miller

A man in his 40s received serious head injuries after being assaulted by two men in Dublin city centre on Thursday evening.

The assault took place on Upper Abbey Street and the man was brought to the Mater Hospital where he is currently being treated. His injuries are believed to be non-life threatening.

A follow-up search of the area located the two men, both aged in their 30s, who were involved in the assault.

They were arrested and brought to Store Street Garda Station where they are currently being detained under Section 4 of the Criminal Justice Act, 1984.

Gardaí said their investigations are ongoing.