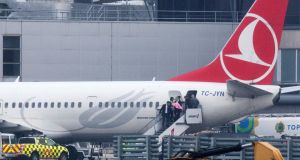 Lisa Smith leaves a Turkish Airlines plane at Dublin Airport with a pink blanket over her head. Photograph: Eamonn Farrell/RollingNews.ie

Islamic State supporter Lisa Smith, who was arrested at Dublin Airport on Sunday on her arrival from Turkey, could face up to seven years in prison if charged with membership of a terrorist organisation.

The 38-year-old former Air Corps member arrived in Dublin just after 10am on a Turkish Airlines flight from Istanbul along with her two-year-old daughter.

She was escorted on the flight by officials from the Department of Foreign Affairs and plain clothes members of the Army Ranger Wing, along with a Turkish security officer.

As soon as the plane landed she was arrested by gardaí from the Special Detective Unit and taken to Kevin Street Garda station for interview. Ms Smith’s parents are caring for the child.

Ms Smith, who is originally from Dundalk, Co Louth, can be questioned for up to 72 hours before being released or charged.

Detectives from the Counter-Terrorism (International) section of the Special Branch have already accumulated a large file on the Dundalk woman through their own investigations which included interviewing acquaintances of Ms Smith in several countries.

They have also gathered information from foreign intelligence services on her movements in the past seven years.

A source said an interview with Ms Smith is the last “piece of the puzzle” before a file can be sent to the Director of Public Prosecutions (DPP). It is understood this will happen early this week.

The decision on whether to charge Ms Smith will rest with the DPP. The most likely charge, if the DPP decides to prosecute, is membership of an unlawful organisation which carries a maximum sentence of seven years.

The charge was drafted in 1939 primarily to deal with the IRA. However, legislation passed in 2005 expanded it to cover foreign terrorist groups.

Gardaí have also been investigating if Ms Smith engaged in terrorist recruitment or training, offences which carry a sentence of up to 10 years.

“By its nature and actions, [Islamic State] clearly qualifies as a ‘terrorist group’ involved in ‘terrorist activity’ or ‘terrorist-linked activity’, all as defined in section four of the Criminal Justice (Terrorist Offences) Act 2005 by reference to the EU framework decision on combating terrorism,” the Department of Justice said earlier this year.

If she is charged, she would be the first person to be charged with membership of a foreign-based terrorist organisation.

Her case could give rise to “several novel legal issues” and “possible obstacles”, a legal source said on Sunday.

Prosecutors would likely rely on media interviews Ms Smith gave to RTÉ and other outlets as evidence of membership.

She has admitted marrying an Islamic State fighter and living under the group’s rule. However, she has consistently denied partaking in any terrorist activities. Her defence would likely revolve around definition of the term “membership”, one barrister said.

As of Sunday night, gardaí had already completed two four-hour interviews with Ms Smith before allowing her to rest for the night. Plans are already in place for covert and overt surveillance of Ms Smith should she be released.

Gardaí are concerned she or her family could be the subject of vigilante action and officers in Dundalk have been ordered to step up patrols around her family home.