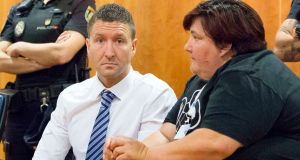 Dubliner James Quinn (35), pictured with a translator, in a court in Malaga where his trial opened on Monday. Photograph: Solarpix

An alleged contract killer accused of the murder that sparked the feud between the Kinahan and Hutch gangs has claimed he was in bed with “a hangover and a prostitute” at the time.

James Quinn (35) told a Spanish court at the opening of his murder trial on Monday he was not at the Costa del Sol apartment block where Gary Hutch was shot twice in the head after being chased round a swimming pool.

Regarding the murder on September 24th 2015, he told a jury at the court in Malaga: “I flew back to Spain from Dubai a couple of days earlier to attend a wedding.

“The morning of September 24th I was in bed with a hangover and a prostitute.”

Asked by state prosecutor Jose Barba if he could remember the woman’s name, the father-of-one from Dublin replied: “I didn’t know her personally.”

State prosecutors want Mr Quinn jailed for life if he is found guilty of murder. He is also on trial for illegal weapons possession and faces a three-year prison sentence if convicted.

Mr Quinn, who had previously refused to answer questions from police investigating the killing, gave a 25-minute address to the jury of five women and four men after brief opening speeches by lawyers.

Mr Quinn, dressed in a blue suit, white shirt and blue tie, was aided by a translator who sat beside him.

He admitted under cross-examination he did not pay taxes but insisted he had a job. “I rented tables to certain people in exclusive clubs in Puerto Banus and hired out luxury boats to some of those people,” he said. “I was always paid in cash. I put some of the money in the bank and kept the rest.”

He said he knew Gary Hutch because they used the same gym in Puerto Banus where Daniel Kinahan - son of cartel leader Christy Kinahan - trained at the time.

Of the deceased, he said: “We associated together but he wasn’t a friend.”

Mr Barba said Hutch, a nephew of Kinahan rival Gerry Hutch, was targeted in the garage under his ground-floor flat where his car was parked on a residential estate in Miraflores near Fuengirola.

Jurors were told his balaclava-clad killer lay in wait for more than two hours after arriving in a getaway vehicle with two unidentified accomplices.

Mr Barba described the assault as a “surprise attack” and said police had found the dead man’s car door open and his keys on the ground by his hand.

“Quinn fired off some 15 shots as he chased his victim and they ran round the community swimming pool twice,” he told the jurors in an opening address.

“Some entered the victim’s back and he fell on the ground with no chance of defending himself before the accused finished him off from close range with two shots to the head.”

Police found 10 mobile phones, €50,000 in €500 notes, a knuckle duster and a Japanese sword inside the apartment Hutch was renting.

The court heard a baseball cap prosecutors claim Mr Quinn swapped for his balaclava before allegedly killing his victim was key to identifying him.

Mr Barba told jurors DNA taken from the cap, which he said was found in a burned-out BMW X3 near the murder scene, was matched to Mr Quinn.

Jurors heard Mr Quinn was arrested a year after the murder following DNA tests on a bottle of water which police seized on a train from Madrid to Malaga.

Two unlicensed guns he allegedly used to kill Hutchwere subsequently found during a search of a property he is said to have been staying at.

“The defendant didn’t kill his victim for the love of it. He killed him because he’s a contract killer working for a criminal organisation,” Mr Barba said.

“The murder sparked an international war between two criminal gangs which has led to the loss of life in Ireland and Spain.”

The feud said to have been sparked by Hutch’s murder has cost the lives of at least 15 people.

Pedro Apalategui, defending Mr Quinn, said: “The fact Gary Hutch suffered a violent death is not up for debate. The question is who killed him. I say it wasn’t my client.”

He also questioned how police had come by the “practically new” baseball cap linking his client to the murder. He said the inside of the getaway vehicle it was “recovered from” had been gutted, adding no mention had been made of the cap in police reports before investigators obtained Mr Quinn’s DNA nearly a year after Hutch was killed.

The trial is expected to finish on Thursday.