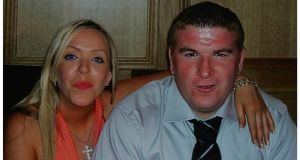 Belfast man Robert McCartney, who was murdered in 2005, with his partner Bridgeen Hagans. Photograph: Bryan O’Brien

The inauguration ceremony, during which the previous incumbent, Nuala McAllister of the Alliance Party, lifted the heavy gold chain of office over Hargey’s head, took place at City Hall last Monday.

Hargey’s elevation to mayor has led to renewed focus on the unsolved murder of Robert McCartney, which happened over 13 years ago.

The 33 year old, a father of two from the Short Strand, was stabbed and beaten by IRA members outside Magennis’s bar, less than a kilometre from City Hall, on the night of January 30th, 2005. He died the next day.

Later that year, when it emerged that Deirdre Hargey was in Magennis’s the night the murder took place, she was dropped as a prospective election candidate for Sinn Féin and temporarily suspended from the party.

After the killing, CCTV tapes were removed from Magennis’s. None of the 70 people who were present, including Hargey, reported witnessing any kind of disturbance. Many people said that they were in the toilet of the small bar at the time.

Hargey has always maintained she saw nothing of the incident and says she “complied fully” with the police investigation.

On becoming lord mayor, she said: “I want to take this opportunity to again extend my sincere condolences to the McCartney family. What happened to their brother Robert was wrong, it should not have happened . . .

She also insisted the murder would not overshadow her year in office.

McCartney’s family reacted to her comments with renewed pain and anger, saying they feel like salt in their wounds.

His sisters dispute Hargey’s claim that she has already done everything possible to assist them in their quest for justice, pointing out that, in the 13 years since the murder, she has never once reached out to them.

The family wants the new lord mayor to meet them and to go to the Police Service of Northern Ireland and tell detectives exactly what she saw in Magennis’s that night.

Any little detail could help, they say – where she sat, who she saw.

“Initially, I wasn’t going to react to Deirdre Hargey’s appointment as lord mayor,” says Catherine McCartney, Robert’s sister. “But when she spoke about extending condolences to the family, I couldn’t let that lie. It was a total platitude, a complete and utter insult, like dancing on Robert’s grave.

“People seem to forget that Deirdre was friends with Jock Davison and they were both in the bar that night. The ‘I saw nothing’ line is not good enough for someone who is now first citizen of Belfast.”

Gerard “Jock” Davison, an IRA commander who subsequently became a community worker, was shot dead in 2015. The McCartney sisters are convinced that it was Davison who gave the order to attack their brother and his friend Brendan Devine, who was also stabbed but survived.

Catherine McCartney believes it would have been “symbolically important” for Hargey, as a member of Sinn Féin, to have immediately approached the police after the murder, without waiting to be asked. “It was her duty to show the nationalist community that it was okay to co-operate with the police.”

McCartney is particularly disgusted by Hargey’s claim that the murder would not overshadow her time as mayor, a statement which McCartney regards as cavalier. “There was no sense of awareness or acknowledgment that it may overshadow the family for the next year. My parents are very upset, and my sisters are angry.”

Together with her four sisters and Robert’s fiancee, Bridgeen Hagans, Catherine fought a long and – initially – high-profile campaign to bring his killers to justice. They took their case to the European Parliament in Strasbourg and met President George W Bush at the White House.

To openly challenge the Provisional IRA and its code of omerta, in the family’s own small republican community, was a radical act. It has cost them dearly.

Although the McCartneys had lived in the Short Strand for generations, they all eventually moved out.

In her 2007 book, Walls of Silence, Catherine describes how the family found itself “at the receiving end of a well-oiled rumour mill and ostracism exercise. . . some in the community treated us as if we were the guilty party, and we found ourselves shunned, vilified and demonised, accused of being attention-seekers or drama queens.

“An illogical resentment set in. Such people forgot about the sick act of murder and our campaign came to be the bigger crime,” she wrote.

“The campaign was completely surreal, absolute madness,” she recalls now. “They [the IRA] were covering up – that’s what it was all about. They murdered a man from their own community. It was like – hold on, you slaughter our brother in cold blood in a bar and you expect us to just say nothing?”

She was motivated, she says, by a sense of outrage at the hypocrisy and entitlement she had witnessed. “The reason they [the IRA] were able to survive as long as they did was because people didn’t view them as gangsters, they had some kind of legitimacy. Then it turns out that their whole cause was just based on power.

“And to me that was the most angering thing, what people had put up with in the 1970s, 1980s and 1990s, the hold they had over these communities, our whole childhoods ruined, because it wasn’t bloody well normal – and all for what, so they could get their grubby wee hands on power? They have proved that they cannot uphold or protect any principles of justice or fairness.”

McCartney says that the identities of those involved in the murder and the subsequent cover-up soon became obvious.

“We knew who they were, they were all ‘RA. This business of Deirdre Hargey saying the IRA wasn’t involved, well, Jock was the IRA. This might sound strange but the fact that the ones who murdered Robert weren’t dead the next day told you that there was a hierarchy of who mattered and who didn’t, because that’s how the IRA work.

“If it hadn’t been their people who did it, whoever did that to a man in the Short Strand would have felt the IRA’s wrath. That showed me who they really were. That exposed their true face to me.”

Has she ever felt like giving up? “Well, I’m not going to deny that once Jock Davison was murdered, I did feel a burden lifted. It was very hard to know that the person who murdered Robert was still out there living and breathing.”

Today, McCartney’s frustration extends to the people she calls “the enablers”: politicians from other parties who don’t do enough, in her eyes, to challenge Sinn Féin on this issue.

“The Alliance Party and the SDLP – who were actually very supportive of us at the time of the murder – why did they not ask questions before they endorsed Deirdre Hargey as mayor? Why did they not say to her, ‘Can you assure us that you have done everything that you possibly could?’ All of them standing there praising her, taking photographs with her at City Hall, and you think – have these people got no conscience?”

Despite the tumultuous events of her life, Catherine McCartney does not consider herself to be a traumatised person.

“It’s not trauma. It’s anger. I can put up with an awful lot about Robert, but things like this go straight to my gut. It feels like you are continually being insulted. To me, there’s a total lack of morality there,” she says.

“I know for a fact that if there was a family who lived down the road from me, and if I was in a bar one night and a man was murdered and the family thought I wasn’t helping, I would be asking to speak to them. I couldn’t live with myself otherwise.”